When two of Joe Blanton's first six pitches went over the outfield fence, Phillies fans probably expected a blowout to be in store. So credit Blanton for settling down and turning in a decent performance on a day when his fastball was sitting in the mid-80s and he was clearly still feeling the lingering effects of his elbow injury. In five innings of work he allowed just the two runs on five hits and struck out five along with one walk.

He departed the game after just 74 pitches, which leads one to wonder: if he is not healthy enough to throw more than 74 pitches, why is he starting in the first place? The drop in fastball velocity required Blanton to rely more heavily on his off-speed and breaking stuff, which all looked good today, but can only put further stress on his already "cranky" elbow.

On to the offense. Wait, what offense? The Phillies were facing Jair Jurrjens, which means of course that there was no offense, so writing this recap is a relatively simple task. Here's a quick rundown of the Phillies first 17 at bats:

Keep reading after the jump, I'm sure you are curious how the next 14 ABs went!

And then Michael Martinez, pinch hitting for Joe Blanton, smacked a single to center and Jimmy Rollins followed with a double to right to drive him in. Rollins was caught between second and third on the play, which proved somewhat costly. Still, when your team's offense basically spots the other team 5.2 innings, it can put you in quite a hole. Luckily, thanks to Blanton's gutsy (pun intended) performance, the Phillies only found themselves down one run after the sixth.

Then Romero came in. It's hard to begrudge Charlie Manuel's deployment of the should-be LOOGY in this instance, as he was slated to face L-R-L (Hinske, Uggla, and Freeman) in the inning. He retired Hinske and walked Uggla and should have departed with two outs and a runner on first but instead left with first and second and one out thanks to some bad BABIP luck and a close play at second.

Then Kendrick came in and I passed out. The ESPN.com play-by-play says Kendrick walked Jurrjens with two outs to load the bases and then Martin Prado hit a two-RBI single to make it 5-1. But surely Kyle Kendrick would never do such a thing. So let's just say "UNIDENTIFIED UNIDENTIFIED to UNIDENTIFIED scoring UNIDENTIFIED runs" until a full account of what actually transpired that inning becomes available.

The Phillies actually plated a pair of runs in the eight on a Wilson Valdez (of all people) double to drive in Raul Ibanez and a John Mayberry groundout to drive in Valdez who had advanced to third on a passed ball, but Craig Kimbrel pitched a clean ninth to close them out.

Roy Halladay versus Tim Hudson in the rubber match tomorrow. Who's ready for some groundouts to second?!?!??

Oh, one last note: Shane Victorino was removed from the game in the eighth inning with what is being described as a sore hamstring. He is expected to miss at least a game, possibly more. The already underperforming (and defensively suspect) Phillies outfield is about to make the step from tragedy to farce. 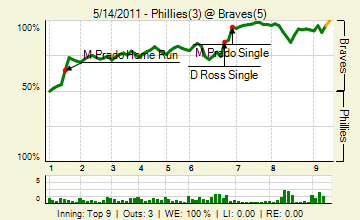