A weak effort from the Phillies "compromised" lineup, and a series of weak broken bat hits from the Braves, with a Dan Uggla home run (seriously) in the bottom of the eighth as the capper, and the Braves defeated the Phillies 3-2 in the series finale today in Atlanta, taking the series.  The teams will not square off again until the second weekend in July.

The Braves scored their first run in the fourth inning after two broken bat bloop singles to center, first from Dan Uggla leading off the inning, and then by Eric Hinske, advancing Uggla to third.  Uggla would score on a one out RBI single from Freddie Freeman, but Roy Halladay was able to induce pop-ups from Brooks Conrad and Tim Hudson to end the threat.

The Phillies got on the board in the top of the sixth on a two run homer from John Mayberry, the only member of the Phillies offense who actually decided to show up today.  Mayberry would finish the day with two walks and the home run, with the Phillies totaling just four hits in the game.

The Braves sixth inning was eerily similar to the fourth, with Dan Uggla reaching base on a leadoff walk, and advancing to third on another single from Hinske.  Freeman would drive Uggla in yet again, this time on a sacrifice fly.  And so, the game was tied at two runs apiece.

The Braves would take the lead in the bottom of the eighth on a solo home run from Dan Uggla, on a grooved 3-2 fastball from Halladay.  Halladay would finish the day with eight hits allowed in eight innings, three earned runs, eight strikeouts and two walks.  The home run by Uggla was the only extra base hit he allowed.  In fact, the home runs by Uggla and Mayberry were the only extra base hits in the game.

The Phillies travel to St. Louis for a quick two-gamer against the Cardinals on Monday and Tuesday. Cliff Lee pitches tomorrow. 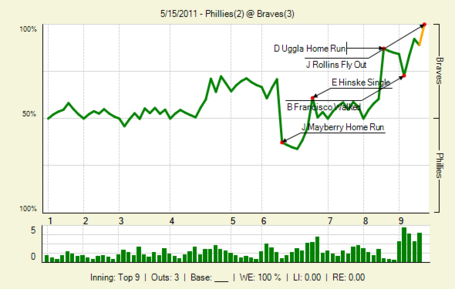