Share All sharing options for: Wild at Heart: Cardinals 3, Phillies 1

Albert Pujols played third base, Cliff Lee walked a career high six batters, and the Phillies lost for the third straight time for the first time this season.

Cliff Lee's very weird 2011 season continues. Every game seems different. Tonight, he was probably squeezed just a bit by home plate umpire Eric Barry Gerry Davis, but Lee still walked six batters for the first time in his career. Bad for anyone, but completely and utterly shocking for Lee, who walked just 18 during the entire 2010 season.  He also allowed six hits in 6 1/3 innings pitched, striking out four and surrendering all three Cardinals runs. You can gripe about a lack of run support, but if you give up 12 baserunners in less than seven full innings, you kind of deserve to lose.

The Phillies struck first, after a Ryan Howard walk in the second inning, and a John Mayberry fielder's choice and stolen base.  Mayberry then scored on a Ben Francisco single.  And that was that.

The Cardinals scored their first two runs in the fourth after Lee surrendered bases on balls to Matt Holliday and Lance Berkman to lead off the frame.  After Allen Craig struck out swinging, Holliday and Berkman advanced to third and second on a Yadier Molina infield single (think about that one).  Former Phillie Nick Punto drove home Holliday, and after a Jake Westbrook strikeout, Berkman came home on a Ryan Theriot RBI single. The Phillies got bailed out after a terrible throw "home" from Ben Francisco sailed to the backstop; Cliff Lee, backing up home plate, flipped the overthrown ball to Carlos Ruiz, who blocked the plate and tagged Molina out at home.

The Cardinals scored their third and final run in the seventh on a John Jay RBI single.

Weirdly, the Cardinals did not get a single extra base hit. Guess you don't need to slug when you get a zillion free baserunners.

These are the times. 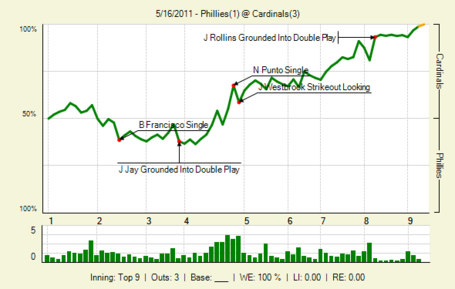