Share All sharing options for: Diamonds and Rust: Cardinals 2, Phillies 1

The Phillies' season-long losing streak stretches to four games, as the Cardinals swept their two game series tonight, winning in walk-off fashion by a score of 2-1 on a bases loaded single from Lance Berkman.

The story of the first part of the game was Roy Oswalt, pitching for the first time since late April. There was some rust -- command of his fastball in particular -- but he held the Cardinals to a single run over five innings, allowing seven hits and striking out three while walking one.  He benefited from some good fortune, most notably on a Albert Pujols double play grounder in the third.  The Cardinals scored their first run in the fourth, with Lance Berkman sliding "past" Phillies catcher Dane Sardinha's "tag" at the plate, wasting a perfectly good throw from John Mayberry on a Yadier Molina single.

The decimated Phillies lineup, predictably, failed to pose much of a challenge to terrific young lefty Jaime Garcia, only managing a single unearned run in the eighth inning, thanks to a Tyler Greene dropped pop-up off the bat of Jimmy Rollins.  Rollins advanced to third on a Michael Martinez single, then scored on a Polanco sacrifice fly.  Garcia struck out five batters -- Ryan Howard thrice!

The game breakers came in the bottom of the ninth.  With the score tied 1-1, Charlie Manuel opted to go with Danys Baez instead of Ryan Madson, presumably saving THE CLOSER for a situation with a lead. Well, guess what happened?  Baez allowed consecutive singles to Ryan Theriot, John Jay, and Albert Pujols to load the bases with no outs.  After inducing a groundout force play at home, Manuel went to his bullpen. Ah! A situation that needs a ground ball or a strikeout. Surely it's time for Madson! No. J.C. Romero. The lefty served up a meatball that Lance Berkman smacked deep into centerfield for a walk-off single, scoring John Jay and sending the Cards fans home happy.

In other great news, Mike Stutes came into the game in the sixth in relief of Oswalt, and after issuing three straight balls to Berkman, left the game with a strain in his right side.  Possible roster moves incoming? 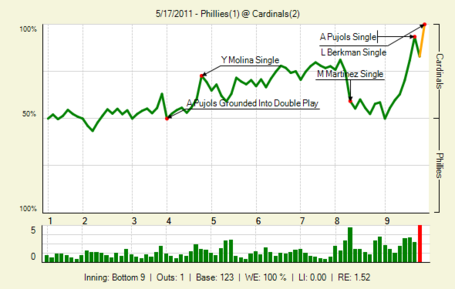