I Am Giambi, Dammit: Rockies 7, Phillies 1

Share All sharing options for: I Am Giambi, Dammit: Rockies 7, Phillies 1

Allow me to begin tonight dwelling on the injury du nuit with an homage to William Carlos Williams by way of artistic tribute to Joe Blanton's sore right elbow, a body part belonging to tonight's named starter. After warming up in the bullpen, Blanton informed the coaching staff 20 minutes before game time that his elbow was too sore to pitch, thus giving Kyle Kendrck, who tends to feature prominently in my game recaps anyway, the surprise start.  (Postgame, Phillies GM Ruben Amaro addressed the press with a satchel full of smugness and said that Blanton and Victorino (hamstring) will go on the DL tomorrow. But he knew what you're thinking! and said Dom Brown was "not ready" and wouldn't be called up. Ohai, then, Delwyn Young. Brandon Moss? The mind reels with possibility.)

But I digress, and so to the bonus baseball-themed homage poem:

so much depends
upon

So, as I said: Kyle Kendrick was thus pressed to enter the Vortex of Suckitude. Joe Blanton's injured? That sucks. It's about to pour rain that they'll play through anyway? That sucks. What, Todd Helton won't play tonight? I'm okay with that, you know why? Jason Giambi will play first. And he sucks! Indeed, the 40-year-old Giambi entered the game for the cranky-backed Todd Helton sporting a lusty .115/.258./.231 line after 31 PAs so far in 2011, and nary a hit to his name since April 10. But the sight of Kendrick must have somehow stirred his 2001-era loins, and he just murdered two of his sorry fatassed fastballs high into the right field seats, the first above the Budweiser sign in the second deck, the second just below it deep into the first deck of seats.  And then Danys Baez came in to relieve Kendrick, and with Giambi's home run pinata already dripping candy on the floor, he threw another homer to knock in all seven runs for the Rockies tonight.

Lost amid yet another dreary offensive performance by the Slumpbots is the fact that Jhoulys "The Unpronounceable Kid" Chacin is a pretty damn good pitcher, one of a string, Jake Westbrook aside, the Phillies have faced in the past week or so. He wound up striking out 9 and walking one (Rollins!), giving up four hits and avoiding whatever glancing contact the Phillies bats could muster.

As if that's not enough fun for a week, hey hey hey, it's time for Interleague Play! Roy Halladay vs. C. J. Wilson and the Texas Rangers tomorrow. 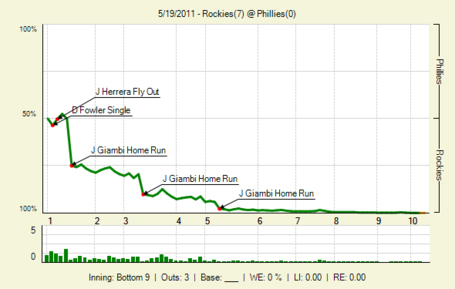