"From the cradle of liberty, Philadelphia Pennsylvania. Do we have closure? No. No, the heinous acts of terrorism last Tuesday will be with us for as long as we all shall live." - Harry Kalas - September 17, 2001

Nearly ten years ago, in the wake of the terror attacks of September 11th, 2001, Major League Baseball emptied its stadiums and suspended its schedule for the remainder of that weird, awful week.

When the games resumed, Harry Kalas welcomed an uneasy fanbase back to the game with the short yet profound statement printed above.  Knowing that Harry was there, and baseball was there, and would still be there, was still some measure of comfort, even if the rest of the world was confusing and frightening.

Tonight, Philadelphia had the accidental privilege of being host to an incredible scene.  As word of the death of al Qaeda leader Osama bin Laden trickled in from friends and relatives via text messages and news alerts, cheers of "USA!" rippled around the ballpark.  Evil exists, and an evil man is now gone. A chilling scene, and a helpful reminder that sports are a diversion and a background piece to real life, brought home by the guests at the park tonight -- the New York Mets, a team whose connection to global terrorism and this precise event requires no explanation.

Details of the game seem fairly unimportant right now.  In any event, the first half of the long slog of a game was marked by right-hander Chris Young's continued dominance of the Phillies lineup.  Young allowed just two hits and three walks in seven innings pitched, striking out seven Phillies batters.  Cliff Lee was solid but uncharacteristically "wild," allowing eight hits and walking two batters, striking out five in seven innings pitched.

The Phillies tied the game at 1-1 on an RBI single from Ryan Howard.  The game would remain tied until the 14th, with Ronny Paulino plating the eventual winning run on two out RBI double.

So Chris Young is now the Tim Redding/Tomo Ohka scrub who will inexplicably dominate the Phillies for years to come.

Still: It was a good day. 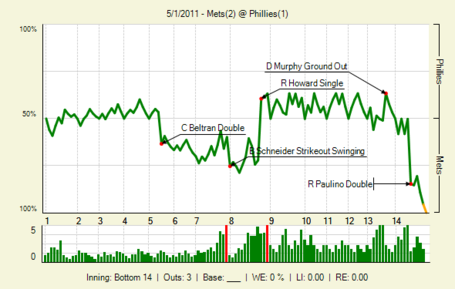