Roy Halladay pitched eight excellent innings, and the Phillies got all the offense they needed on home runs from Ben Francisco and Raul Ibanez, as the Phillies topped the Texas Rangers tonight in Philadelphia by a score of 3-2.

Halladay struck out seven over eight innings and allowed two runs -- one in the first on a weird double steal by Elvis Andrus, and the second in the eighth inning, with Endy Chavez scoring on two ground ball outs after leading off the frame with a double.

The Phillies collected home runs from Ben Francisco -- a two run bomb in the second inning -- and a solo shot from Raul Ibanez in the fourth inning.

Although they scored a couple more runs than they've grown accustomed to these past few days, the team still managed just four total hits off Rangers' pitching.  C.J. Wilson was sharp, striking out ten in seven innings, his only mistakes coming on the Francisco and Ibanez homers.

Ryan Madson pitched a scoreless ninth for the save, but with a scare after the new closer deflected a David Murphy shot up the middle with his pitching hand.  Madson appeared to be OK, and the Phillies got the last out of the game on a Murphy caught stealing at second base. 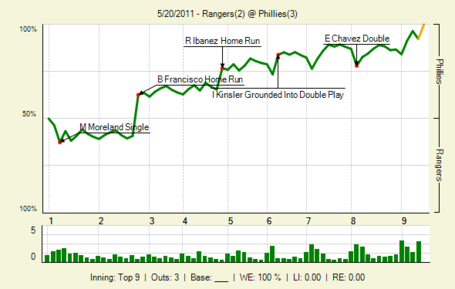