The Phillies did that thing they do: win.

And they did it in the way they normally do: by not scoring a lot of runs and pitching really well.

They passed the 6-hit plateau for the first time in a week, but they could only plate two tonight. The first run came in the bottom of the second on a Ryan Howard solo shot--a laser into the right field seats--to snap his 0 for 23 slump.  A bit of well-timed bad baserunning in the previous inning made the homer possible. In the bottom of the first, Dom Brown, in his first major league start of the 2011 season, reached base on a fielder's choice and was thrown out trying to steal second with two outs and two strikes on Howard. End of inning, yes, but it meant Howard would still be the batter the bottom of the second and he'd get a fresh count. For Ryan Howard, a fresh count is better than a 1-2 count with a runner on second (if one of you nerds can find a way to actually calculate this, that'd be pretty tubular).

The second and final run came in the sixth on a 2-out John Mayberry single to drive in Raul Ibanez. Carlos Ruiz got caught in a rundown between second and third on the play, so Wilson Valdez didn't get a chance to extend the "rally" (LOL!!!). Colby Lewis is a good pitcher and he didn't pitch poorly tonight, but the Phillies had a bunch of baserunners and couldn't cash in. Dom Brown had a chance to bust the game open with the bases loaded in the fifth but he flew out to right to end the inning--he finished the game 0 for 4. Clearly he doesn't have what it takes to make it at the major league level.

Meanwhile, Cliff Lee certainly atoned for his previous outing, in which he struggled with a small zone and command issues to walk six batters. Against his former team, Lee pitched a gem: 8 innings, 5 hits, 2 walks, 10 strikeouts, and 0 runs. It was his fifth double-digit strikeout performance of the season. He mixed his pitches well and his fastball was much sharper than it was against the Cardinals. The highlight of this outing was when he struck out the side on 10 pitches in the top of the fifth. He's good.

For the second night in a row (and the third time in their last four games) the Phillies' starting pitcher went eight innings and handed the ball off to Ryan Madson. Former future Philadelphia Phillie Michael Young led off the ninth with a single but was promptly erased on an Adrian Beltre GIDP. Mike Napoli then flied out to center  to give Madson his ninth save in nine opportunities. CT scans have revealed that Madson has an enlarged superior frontal gyrus--the part of the brain that controls self-awareness, which in turn explains his lack of a Closer's Mentality--but compared to his predecessor Brad Lidge, who is well known to possess a Closer's Mentality, Madson certainly makes closing out games look easy.

Oswalt tomorrow. Also, his return is nigh. 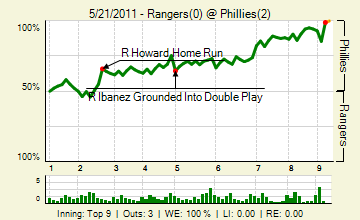