Share All sharing options for: Chasing It: Phillies 10, Reds 3

A regular-season record crowd packed Citizens Bank Park tonight to see second baseman Chase Utley's regular reason debut. What they got was a show of offensive firepower that the team hasn't displayed for quite some time.  And Chase Utley had nothing to do with it.

Every Phillies starter had at least one hit except for Utley, with Placido Polanco leading the charge with a two-run bomb in the bottom of the first inning.  Everyone else got into the act in the third inning, with the Phillies scoring seven runs -- more than they combined total offensive output in the entire Rangers series -- battering Reds starter Bronson Arroyo for nine runs in 2 2/3 innings pitched.  Jimmy Rollins put the game away with a three run home run in the frame, making the score 9-0.

The Reds would bring the score to 9-3 on a three run homer off the right field foul pole by Jay Bruce in the top of the fourth.  Phillies starter Cole Hamels was just okay tonight, allowing the three run homer and striking out four and walking two in six innings pitched.  Relievers Michael Stutes, Antonio Bastardo, and Danys Baez each pitched a scoreless inning to finish it out.

Utley had some decent at-bats and made good contact, but still went 0-for-5.  Some nice plays in the field, but no real tests so it was hard to tell just how he was doing.  Still, it's good to have Chase back; the rest of the offense seems to agree. 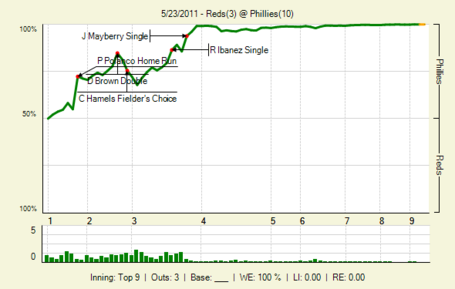