The Phillies played a businessperson's special today, only 12 hours after last night's 19-inning bender ended. In no condition to drive after that wacky affair, the majority of players slept over in the clubhouse.

As far as the game went, the Phillies' hangover cure is clearly more effective than whatever the Reds were using. The bats broke out for 10 runs for the second time in four games. Literally everyone hit; Ibanez launched a three-run homer in the third off of Homer Bailey to get things going in the third, leadoff hitter extraordinaire Michael Martinez had two hits and two RBIs, Dom Brown had a couple hits and a walk (plate discipline yummmm), and Chase Utley popped his 2011 home run cherry with a blast in the eighth.

But the real star today was Cliff Lee. Needing their starter to go deep into the game to give the bullpen some rest after last night's marathon, Cliff Lee pitched eight workmanlike innings today. He struck out eight, walked one, and allowed four earned runs. But two of those runs came on a Jay Bruce homer, which can certainly be forgiven at a moment when Jay Bruce simply can't be retired. Miguel Cairo had three hits too--eff that guy.

A legitimate argument can be made that Cliff Lee the batsman was better than Cliff Lee the hurler today. WIth the game tied 4-4 in the bottom of the sixth, Lee came to the plate with the bases loaded and smashed a ground rule double to center off of Daryl Thompson to put the Phillies back on top 6-4--a lead they would never relinquish. So on the same day a position player recorded a win as a pitcher, the pitcher recorded the game-winning RBI as a hitter. For good measure, Lee added an RBI single in the seventh. 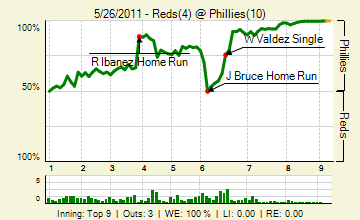 Now for some links, after the jump.

Inside the Philly Marathon
Nights like last night are Jayson Stark's Spankwire.

The game story that wasn't: Phillies lose in 10
The Plot Against America

Box Score Recap, 25 May 2011
PhuturePhillies could only give you the links to the Minor League boxscores today because he was up late watching TV last night. What a lazy bum.

The Funniest Pitching Appearance By A Non-Pitcher
I'm still kind of in awe that Wilson Valdez has a better fastball than Kyle Kendrick.

Buster Posey's Injury Destroys An Amazing Wednesday Of Baseball
It was a gnarly injury. Gag-inducing.

Derek Lowe Excused From Drunk-Driving Charge
I think the fact that he wasn't "impaired" actually makes his decision to street race even stupider.

Mets announce Einhorn has invested $200M in team
Why would Ira Einhorn have any interest in investing in the Mets?