A sloppy game on nearly all accounts, with key miscues on both sides and another weird but effective outing from Roy Oswalt, with the difference coming on a few weak hits against Mets reliever Francisco Rodriguez, the Phillies overcame a shaky outing from closer Ryan Madson and a key error from Chase Utley en route to a 6-4 victory.

Mets starter Chris Capuano got off to a fast start, striking out the side in the first inning, and not giving up a hit until the third inning, an RBI single from Jimmy Rollins that put the Phillies up by a score of 1-0.  The Mets' first hilarious error came in the top of the fifth on a bloop single from John Mayberry to center fielder Angel Pagan.  Pagan misplayed the ball, allowing Mayberry to reach second.  Mayberry then advanced to third on a throwing error from Jason Bay, and then scored on an RBI single from Oswalt, giving the Phils a 2-0 lead.

Then it was time for the Phillies to get in on the laughs.  With two outs in the bottom of the fifth, Jose Reyes lifted a pop-up into shallow left field.  Jimmy Rollins and Chase Utley, both going for the ball, collided; the ball clanked off Rollins' glove, and Utley was (rightly) charged with an error.  Reyes advanced to second on a single by Justin Turner, and scored on an RBI single from Carlos Beltran.

Oswalt's final line was six innings pitched, nine hits, and only two strikeouts, with one earned run allowed.  As has been a trend for Oswalt recently, there were very few strikeouts, and his velocity appeared to be done down.

Mike Stutes replaced Oswalt in the seventh, allowing a leadoff double to Jose Reyes.  Reyes then advanced to third on a totally sweet "pickoff attempt" from Mike Stutes to absolutely no one.  Reyes scored on a Ronny Paulino single, taking a 3-2 lead.

The Phillies tied the game in the seventh after a single and stolen base from Domonic Brown, and an RBI double from Jimmy Rollins.  The Phillies then plated three runs of Francisco Rodriguez in the top of the ninth, taking a 6-3 lead, thanks in part to a misplay from first baseman Daniel Murphy on a Domonic Brown RBI single.

Ryan Madson was shaky in the ninth, allowing a leadoff single to Reyes, who took second base on defensive indifference.  With one out, Carlos Beltran drove Reyes home, making the score 6-4.  Beltran advanced to second on the play on an error by "center fielder" Michael Martinez.  After a Jason Bay single, the game came to a merciful conclusion on a double play grounder from Daniel Murphy. 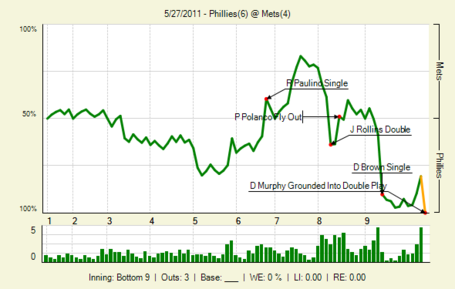