Cole Hamels hasn't had much luck with the Mets over the last few seasons. His first start of 2011, as you might recall, came against the team from Queens, and Hamels didn't make it out of the third inning. Since then, he'd been, well, awesome, to the tune of a 6-1 record and 2.35 ERA in nine starts. But when he began his outing Saturday night by allowing a double to Jose Reyes, then watched Reyes steal third and come home on a Justin Turner single to give the Mets a 1-0 lead two batters into the bottom of the first, some "here we go again" thoughts doubtless crossed some Philadelphian minds.

But it wasn't to be. Hamels allowed another run in the third on a two-out Jason Bay single that plated Reyes again to give the Mets a 2-0 lead, and New York had seven hits (and five stolen bases) in all through Cole's first 3 1/3 innings. From that point on, he stopped the Mets dead, retiring the last eleven batters he faced to finish his night with seven innings pitched, two runs on those seven hits, no walks and ten strikeouts. The game was there for the Phillies if their bats could come to life.

The problem was that Mets starter Mike Pelfrey--whom the Phils had rocked twice at Citizens Bank Park last month--is a much tougher pitcher at Citi Field, with an 18-8 record and 3.11 ERA in 40 career starts. He narrowly outpitched Hamels into the eighth inning, allowing only one run in the fourth on a Chase Utley pop fly double behind third base and a two-out double down the first base line by Raul Ibanez. After that, Pelfrey matched Hamels out for out, setting down the next twelve batters he saw. At that point, the Mets were an out away from taking a 2-1 lead into the ninth.

And at that point, their essential Mets-ness began to manifest. Jimmy Rollins smacked Pelfrey's 117th and last pitch of the night into centerfield for a single, summoning Mets manager Terry Collins from the dugout to bring in lefty Mike O'Connor to face Utley. Chase fell behind 0-2, worked the count even as Rollins stole second without a throw, and flared a single to left that tied the game. Exit O'Connor; enter prodigal Met Jason Isringhausen to face Placido Polanco, who worked a walk. Doing the Full LaRussa, Collins yanked Isringhausen in favor of lefty Tim Byrdak to face Ryan Howard, who was 2-13 against Byrdak for his career. But he got ahead 2-0, then slammed a double into right field that scored both runners for a 4-2 Phillies lead.

From that point it was easy. Jose Contreras worked a 1-2-3 8th, and the Phils added an insurance run in the ninth on a Domonic Brown double and a pinch-single from Ben Francisco. Ryan Madson, shaky in saving Friday night's game, was stout 24 hours later, setting the Mets down in order to secure his 11th save in as many chances.

The Phils go for the sweep tomorrow behind Vance Worley. The Mets send Jon Niese to the hill. Fangraph-y goodness: 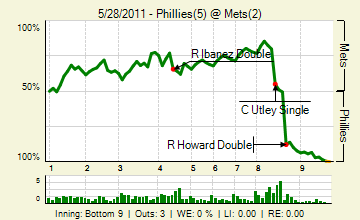