Nobody Got Hurt: Mets 9, Phillies 5

Share All sharing options for: Nobody Got Hurt: Mets 9, Phillies 5

When the Phillies posted their lineup late this morning, it was pretty clear that they were not exactly going all out to win the game.  Facing lefthander Jon Niese, the Phillies opted to rest lefty batters Ryan Howard, Domonic Brown and Chase Utley, along with day-after-night-game catcher Carlos Ruiz, and the offense predictably struggled in the early going.  What was slightly surprising and disconcerting was the egg laid by Phillies starter Vance Worley.

Worley lasted just three innings, allowing eight hits, albeit only five earned, thanks to some not-so-spiffy defense in the first inning.  Although not scored an error, Raul Ibanez's misplay of Jose Reyes's looping liner in the first allowed a likely single from the resurgent shortstop to turn into an easy triple, as Ibanez's ill-considered dive for the ball meant a very, very, very long run back to the wall for the left fielder.  Later, with runners on first and third with two outs, Jimmy Rollins misplayed a grounder from Angel Pagan, bobbling the backhanded attempt.  Two bloop hits later, the Mets batted around and were up 4-0 after one.

The Mets would plate four more runs in the second, going up 8-0 and sending me, a guest at Citi Field, to explore the ballpark.  I went to visit dajafi in his seat for awhile, where we chatted and decided to fire Wet Luzinski.  Pack your bags, kid.

The Phillies got on the board in the third thanks to a little bit of LOL Mets action from Jose Reyes.  After Dane Sardinha led the inning off with a single, the Phillies first hit, and a Vance Worley strikeout, Jimmy Rollins hit what should have been an easy double play grounder to Jose Reyes.  Except, you know, it went between his legs.  Sardinha would score after base hits from Wilson Valdez and Placido Polanco, but the threat was extinguished after a Raul Ibanez pop-up and Ben Francisco strikeout.  The Mets would score their final run of the game after a Josh Thole single and Jose Reyes triple.  In case you're wondering, yes, that creep Reyes was 4-for-5 with two triples today.

The Phillies made things kinda sorta interesting toward the end of the game.  In the eighth, Raul Ibanez hit a long two-run homer of Mets' reliever Taylor Buchholz.  Ben Francisco singled, and later scored on a Dane Sardinha double two feet from the top of the center field wall.  Sardinha would score on a bullet single off the right field wall from pinch-hitter Domonic Brown, who wisely didn't try to stretch the hit into a double.  He showed more wisdom than Jimmy Rollins, who was thrown out at second on the very next play, trying to stretch a very similar hit into a double.  Because you know, getting that extra base was super important.  Not a banner day for the former MVP.

The Phillies would score one more run in the ninth, after a Raul Ibanez walk and a Ben Francisco double.  John Mayberry would strike out to end the game.

Not shocked or terribly dismayed to lose this one, but it would have been nice if the loss weren't so ugly, and if I didn't have to wait on the friggin' LIRR platform for 40 minutes after the game.

The Fangraph totally tells the tale. 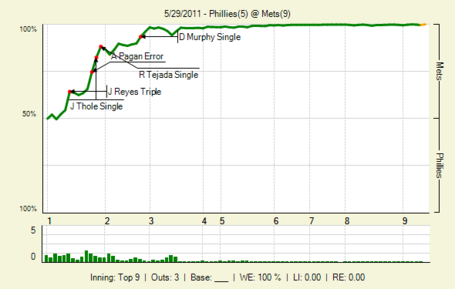