Share All sharing options for: Call It, Friendo: Phillies 4, Nationals 1

On a night anticipated for months for the return of prodigal outfielder Jayson Werth, it was another Phillies postseason hero who made the night memorable.

Cole Hamels pitched his first complete game of the 2011 season, allowing just a single run on a Mike Morse solo home run in the seventh inning, and came a few feet short of his first career home run himself in the bottom of the third inning, lining a triple off the right field wall just a couple feet from clearing the fence.  Hamels struck out six and walked just one, allowing five hits.

Hamels also scored the first run of the game, coming home on a Jimmy Rollins single in the third.  Hamels also stroked another hit in the bottom of the eighth, an opposite field single, but was stranded at third.

Werth, for his part, walked in the first, but did not reach base again, including a dramatic strikeout for the second out in the ninth inning.

In other great news, Raul Ibanez snapped his 0-for-Bin Laden's dead plus a few days streak, hitting not one, but TWO doubles.

The Phillies did just enough against Nationals starter Livan Hernandez to win, hitting lots of balls hard, but falling victim to a total of three double plays.  This game is a pretty good template of how the Phillies will win most of their games in 2011 -- great starting pitching, just enough offense.

In other news, this is my first WINNING game recap of the season. Let's celebrate! 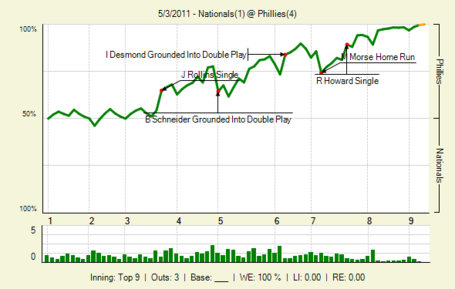