For a minute there in the bottom of the seventh inning, Roy Halladay looked positively human. On a blistering hot day when he'd already given up three solo home runs, Halladay was approaching the 100 pitch mark and trying to protect a one-run lead for the second time on the day after the Phillies had plated two in the top of the inning. But Nationals leadoff hitter Alex Cora flared a double down the right-field line, and Ian Desmond dropped a perfect bunt toward third base that went for a base hit, putting runners at the corners with no outs and the top of the order due.

But this is Doc; it's not even a slight surprise that he escaped with no damage allowed. He got ahead of Rick Ankiel, then induced a grounder back to the mound that he threw home, where Carlos Ruiz caught Cora in no-man's land for a fielder's choice and a huge first out. Next up was Danny Espinosa, who had one of Washington's three solo homers; Halladay got him on a flyout to left field. The Nats' last hope was Jayson Werth, who had one of those at-bats Phillies fans remember fondly--taking close pitches, fouling off two strike offerings--before ending it the way we remember less warmly, with a swinging strikeout. Halladay's afternoon was complete after 111 pitches, seven innings, ten hits allowed including those three solo shots, and five strikeouts. As is often the case, he was as or more impressive when his Eater-of-Worlds stuff wasn't at hand and he had to work out of trouble.

Meanwhile, the Phillies hitters gradually shook off the stultifying spell of Washington starter Livan Hernandez, reaching the, um, deliberate veteran with three runs in the fourth to turn a 2-0 deficit into a 3-2 lead. Ryan Howard and Raul Ibanez got the Phillies even with back to back solo home runs, the team's first consecutive bombs of the 2011 season. Carlos Ruiz followed with a double and scored on Domonic Brown's single; after John Mayberry singled for the Phils' fifth straight hit, Halladay moved the runners to second and third with two outs, but Jimmy Rollins' deep fly to right died in Werth's glove on the warning track.

Washington tied the game in the fifth on Espinosa's homer and went ahead an inning later when Laynce Nix took Halladay out of the yard. But the Phillies scored the decisive runs in the seventh, when Placido Polanco singled with one out to chase Hernandez. Reliever Sean Burnett got ahead of Chase Utley 0-2, but couldn't finish him as Utley outlasted the lefty for a walk. Howard followed with his second big hit off a southpaw in three games, singling in Polanco to tie the game and send Utley to third; he scored on a deep sac fly by Ibanez.

Antonio Bastardo and Jose Contreras combined to hold Washington off in the 8th, working around Contreras' plunking of Michael Morse, who had hit the first home run off Halladay. Ryan Madson finished things off with an overpowering ninth, striking out two including Ankiel to finish the game as the Phils improved to a major league-best 34-20 on the season. 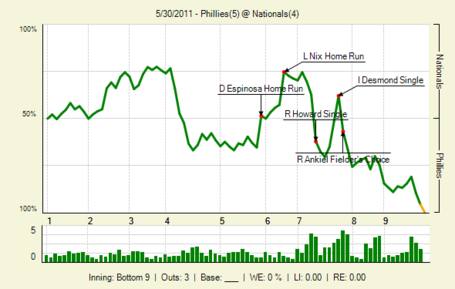