Phillies outfielder Domonic Brown connected for his first Major League home run of the 2011 season in the fifth inning, and was immediately followed with another solo shot from John Mayberry, Jr., as the Phillies went on to lose to the Washington Nationals 10-2.

In addition to the home run in the fifth, Brown also stroked a double in the seventh inning.  The rookie right fielder raised his season batting average to .333.  Carlos Ruiz and Placido Polanco each also collected two hits apiece.

Phillies relievers Danys Baez and Mike Zagurski each successfully took the mound and delivered multiple pitches without injury to either themselves or any (known) animals. 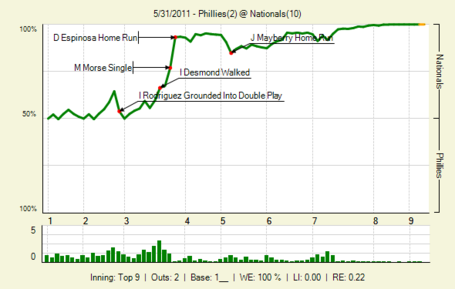