The Phillies claimed their 20th victory of the season Wednesday night with key contributions from the oldest and youngest players on the active roster. Fresh off a two-double game Tuesday night that broke his 0-for-35 skid, maybe not-quite-done oldster Raul Ibanez went 3 for 4, including a majestic fifth-inning home run that broke a scoreless tie, and rookie pitcher Vance Worley continued to stand his ground among all those aces with a six-inning, one-run gem to notch his second win in as many starts.

Worley was the story early on, striking out three of the first four Nationals hitters he faced among his seven Ks on the night (he got Jayson Werth twice, both times swinging) and working around the occasional baserunner. He did it with the bat as well: with one on and one out in the fifth following Ibanez's homer, he chipped in a single to keep the inning going. After Jimmy Rollins loaded the bases with a walk, Shane Victorino drove in the team's second run with a single and Worley came in on Placido Polanco's flyout.

The bespectacled right-hander gave one run back in the top of the sixth, which he started by hitting college teammate Danny Espinosa with a pitch before inducing an Ian Desmond groundout and fanning Werth for the second time. Worley seemed to have Adam LaRoche struck out as well on 1-2 and 2-2 pitches, but home plate ump Alfonso Marquez disagreed; LaRoche eventually doubled to the gap, scoring Espinosa and ending Worley's 21 2/3 inning scoreless streak dating back to September 2010.

The Phillies blew it open in the bottom of the sixth, loading the bases with no outs to chase Washington starter Jason Marquis. Ross Gload pinch-hit for Worley and struck out, but Rollins plated Ibanez with a single and Brian Scheider and Wilson Valdez came home on a Victorino fielder's choice that Desmond threw away trying to double up the Flyin' Hawaiian.

J.C. Romero made his return from the DL with a scoreless seventh inning, and Michael Stutes continued his impressive work with a scoreless eighth. Danys Baez gave Washington a flicker of hope, allowing singles to Laynce Nix and old friend Matt Stairs--his 100th career pinch-hit--before surrendering a three-run homer to Espinosa, but Desmond grounded out on the next pitch to end it. 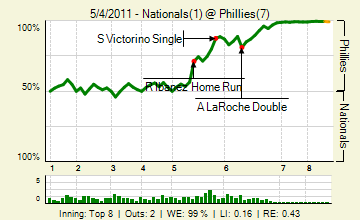