If I told you Cliff Lee struck out 16 Atlanta Braves batters tonight, walking just one, you probably would have pictured one of those classic Lee masterpieces, one run at the most. Ah, but no.

Lee surrendered three runs in a weird top of the third inning -- all with two outs -- on four first-pitch hits.  And that turned out to be all the Braves needed, as Drunky Tits Derek Lowe was absolutely dealing tonight.  Lowe held the Phillies hitless through six innings, only surrendering two hits after it became clear that the righty was suffering from some kind of right foot ailment, likely caused by a broken liquor bottle.  The second hit -- a ground-rule double by Placido Polanco -- should have scored Shane Victorino from first base, had the ball not bounced over the center field wall.  Despite having runners on second and third with no outs, the Phillies failed to score, as reliever Eric O'Flaherty struck out Ryan Howard, Ben Francisco, and Raul Ibanez in succession in a series of truly brutal at-bats.

The incendiary Danys Baez coughed up two additional runs in the eighth inning, doing his damnedest to put the game out of reach.

Lee's outing without a doubt one of the weirdest pitching performances I've ever seen. Likely the weirdest.

The Braves put 14 balls in play against Lee, nine of them turned into hits, for a single game BABIP of .643.

Lee issued one base on balls -- to opposing pitcher Derek Lowe.

Lee's 2011 season, particularly the past few outings, has been a weird, DIPS-theory defying mix of high strikeout totals, low walks, low HRs, high hit totals and moderately high runs allowed.  And it's not like the hits allowed have been dinks, dunks, and dribblers; opponents really seem to be tattooing the ball.  Lee's pinpoint control is historically unique.  It's possible that this incredible control is biting him: If the ball's right around the plate, and you can hit it, maybe you'll hit it hard. 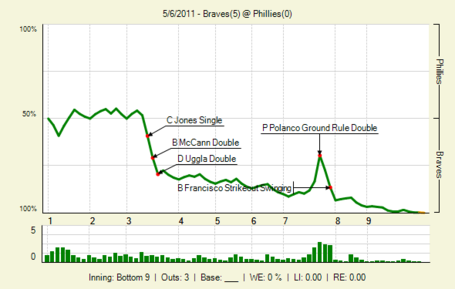