Somehow, Kyle Kendrick makes it work against the Braves. In 11 appearances (9 starts) facing Atlanta over his career before Saturday, the much-maligned right-hander had thrown 54 innings, issued 22 walks while striking out just 21... and gone 5-1 with a 2.55 ERA. So if there was one team to spot-start him against, in hopes that Kendrick's unfathomable 2011 luck (13 innings, 8 walks, 2 Ks, 2.08 ERA) might hold, this was the team.

And it did. Filling in for disabled Roy Oswalt, Kendrick was both good (5 innings, 2 hits, 1 walk, 3 strikeouts) and lucky (a handful of deep flyouts and lineouts), and the Phillies generated just enough offense against highly touted Braves rookie Julio Teheran to win 3-0 and even this early-season showdown series at one game apiece. The Phillies scratched out a run against Teheran in the second on a walk,a  single, and a fielder's choice, then stretched the lead to 2-0 in the fourth on Ryan Howard's seventh home run of the season. An inning later, Jimmy Rollins walked with two outs and Shane Victorino followed with a triple to deep center field that made it 3-0 and ended Teheran's major league debut after 4 2/3 innings.

The bullpen did the rest. J.C. Romero allowed a single and a walk to start the sixth, but retired Jason Heyward, Chipper Jones and Brian McCann in order to turn aside the Braves. Michael Stutes, Antonio Bastardo and Ryan Madson finished things out with a scoreless inning each, Madson notching his third save in as many chances. 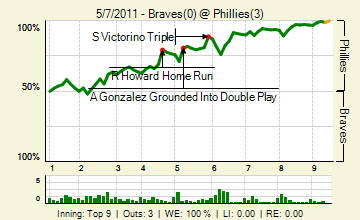