Share All sharing options for: What're You Gonna Do?: Braves 5, Phillies 2

Probably no stranger comment on this weird series than that the Phillies won the game started by Kyle Kendrick, and lost Cliff Lee's and Cole Hamels' starts.

And it's not even that Lee and Hamels pitched particularly badly; Lee's 16 strikeout bizarro masterpiece has been discussed at length.  Hamels didn't reach those heights, and certainly shoulders some of the "blame" for this loss, but the lefty struck out nine and walked one in seven innings, allowing only five hits.

Unfortunately, two of those hits were home runs. The first, a two run bomb from Alex Gonzalez in the second inning on a changeup just above his shoe-tops -- credit to Gonzalez for putting a good swing on a good pitch -- and a solo shot from Freddie Freeman in the fifth.

Jair Jurrjens did what Jair Jurrjens does -- doesn't issue free passes (one walk), keeps the ball in the yard, and induces grounders (10 ground ball outs).

Mike Stutes, who had done a terrific job since getting the call up from Triple-A, struggled tonight, walking Nate McLouth in the top of the eighth, and then grooving a 2-0 fastball to Eric Hinske, and the Last-Out-of-2008-World-Seriessmith deposited the ball deep in the right field seats, effectively putting the game out of reach.  Or so it seemed.

The Braves formidable bullpen duo of Jonny Venters and Craig Kimbrel looked downright mortal tonight.  Shane Victorino, batting right handed, scorched a triple to deep left-center that narrowly missed leaving the yard, and promptly scored on a Placido Polanco infield single (more like an error) to shortstop Diory Hernandez.  After a Raul Ibanez single to right, pinch-hitter John Mayberry, Jr. came to the plate with a chance to tie the game.  He battled, but finally struck out swinging. flied out to center.

And in the ninth, Kimbrel allowed a one-out single to Ross Gload, and walked Jimmy Rollins on four pitches.  Victorino struck out looking on a pitch about six inches outside, and Placido Polanco popped out to end the threat and the game.

So, taking stock: The Phillies lost the game and the series, but sit tied at three games a piece with the Braves at this point in the season -- without Chase Utley, lacking catcher Carlos Ruiz and reliever Jose Contreras for the last three games, etc.  Not ideal, all in all, but far from the apocalypse.

The Phillies hit the road to start a three game set with the Marlins tomorrow, with Joe Blanton getting the ball for the Fightins. 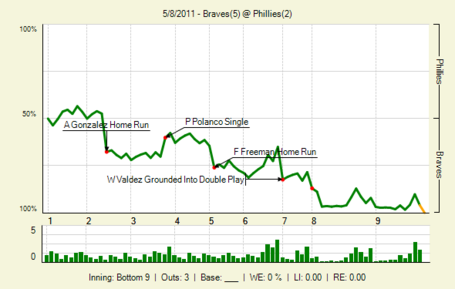