Share All sharing options for: Nationals 2, Phillies 1: John Lannan Works Toward His Execution

To those of us who supported his continued freedom, John Lannan's saving grace was that the Phillies always beat him.  Until today, despite regularly beaning top Phillies hitters, Lannan had never beaten the Phillies, and they were 12-1 in games he had started.

Well, it's a new ballgame now.  Today, despite decent pitching from Roy Oswalt followed by stellar bullpen work from Michael Stutes and Antonio Bastardo, the Phillies lost to the Nationals in a game started by Lannan for the first time ever.

Making the case for Lannan's freedom even more difficult, Lannan hit another Phillie.  In the top of the third, he hit John Mayberry Jr., proving once again that no Phillie, lefty or righty, is safe at the plate against Lannan.  Mayberry was fine, thankfully, but the Phillies offense wasn't.  For the first time since Chase Utley returned, the generic game recap (altered with Phillies getting 1 run) is appropriate here.

The rest can be gleaned from the unhappy ascending fangraph: 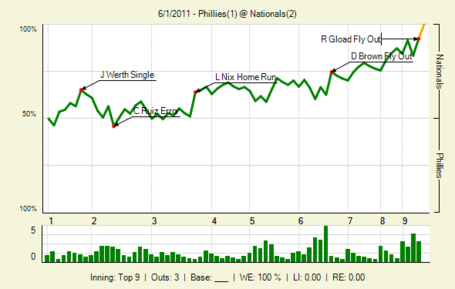