Phillies Hang On For Needlessly Thrilling 7-5 Win Over Cubs

Share All sharing options for: Phillies Hang On For Needlessly Thrilling 7-5 Win Over Cubs

Roy Halladay pitched a great game tonight.  Because of exceptionally hyperactive bullpen management that resembled a 9 - 10 year old Little League game where Everyone Pitches WOOHOO!!!, the Phillies managed to nearly squander a 7 - 0 lead.  Calling to mind these highly specialized gentlemen, Charlie Manuel made sure that almost nobody was feeling left out.

The offenders this evening were largely limited to J.C. Romero (put in a position to fail by Charlie Manuel yet again) and Jose Contreras who continues to look his age, or even his actual, real age, adjusted for the Old Russian Calendar still in use in Cuba when he was born, since coming off the disabled list.  Halladay looked certain to win his 9th game when he left after 7 innings with the following line:  7IP, 6H, 0HR, 0BB, 9K, and 106 pitches, of which 76(!) were strikes.  He was lights-out and he pitched like a man among boys.

The Phillies staked Halladay to the 7 - 0 lead, striking in the first inning with a walk by Rollins and a single by Victorino.  "Productive Outs" ensued, and eventually, Victorino scored on a fielder's choice when Howard grounded out.  In the second inning, Raul Ibanez walked and Domonic Brown homered to right on a 1 - 1 fastball from Carlos Zambrano, extending the lead to 3 - 0.

Things got really fun in the seventh.  Rollins started with another walk.  He was sacrificed to second.  Then Utley was walked intentionally.  Howard walked.  Up came Placido Polanco, who was hitting fifth today.  Polanco drilled a 2 - 0 pitch from Zambrano into the left field seats, and there was joy in the land as the Phillies proved that they actually can score more than Comic Book Guy.  Zambrano may or may not have had a tantrum; it was impossible to tell with all the celebrating.

This is the real weepy and like, tragic part of the story, O my brothers and only friends. (link is ahead of that line -- couldn't find the voiceover bit).

With Ben Francisco hitting for Halladay in the Phillies' half of the seventh, his day was over.  After the aforementioned 106 pitches and the game a lock at a 99%+ win expectancy, manager Charlie Manuel did the right thing by going to Jose Contreras.  Contreras has not been right since coming off the DL, and when better to give him some work than with a 7 -0 lead in the eighth inning against the Cubs?

Alas, it was not to be.  Contreras walked Fukodome on 6 pitches.  Darwin Barney naturally selected to ground into a fielder's choice.  Starlin Castro doubled.  Carlos Pena worked a 10 pitch at-bat for a walk to load the bases. During the Pena at bat, many frustrated observers noted that Contreras appeared to be throwing strikes, but just couldn't miss the bat enough.  Aramis Ramirez then singled, driving in two runs and driving out Contreras.

The second seal was opened and J.C. Romero emerged from the Bullpen of the Damned, but to face a left-handed hitter, which is something he has been good at this year.  Romero failed miserably, walking LHB Blake Dewitt on four pitches, loading the bases. Romero, again very effective against LHB this year, but terrible against RHB, unfortunately stayed in against the next two righties.  Predictably, he failed some more, as Geovanny Soto singled to left, driving in another run.  Lou Montanez then pinch hit and singled, driving in two more runs, cutting the lead to 7 - 5.

Out went Romero, and in came Mike Stutes, whose strikeout of Brad Snyder (looking) was huge.  Fukodome, batting the second time in the inning, flied out to end the inning.

Stutes stayed on to record the first two outs of the ninth inning.  Manuel, possibly overreacting to the obvious failure to play matchups with Romero, brought in Bastardo for the last left-handed hitter.  Stutes had pitched 1.1 innings, but a one-out save?  A win is a win, though, and Bastardo cleaned up the last out and "saved" the game with a K on 3 pitches.

Here's a fangraph with some irregular heartbeats showing at the end.  The cardiac arrests around Philadelphia tonight may wipe out the memory of a great game by Halladay, but they shouldn't.  He was masterful again.  What a pleasure it is to be able to watch him pitch.  Thankfully, he did get the win, and the bullpen didn't blow it completely, though they gave it their best.  One is left to wonder how much "excitement" could have been avoided had Charlie Manuel not left J.C. Romero in to face two RHB. 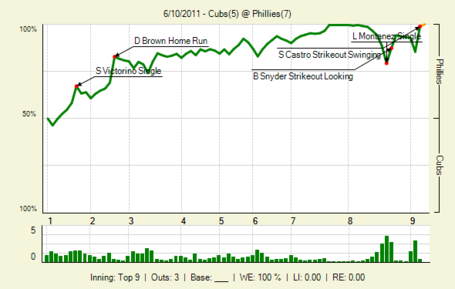