On a game broadcast by Fox, the Phillies and Cubs faced off in Philadelphia today.  Matt Garza and Cliff Lee headlined the game, providing the prospect of a delightful pitching matchup.  Neither player disappointed, but Lee had one of  those games that Phillies fans dreamed of during Lee's Odyssey of 2010.  Upon arriving home in 2011 at Ithaca on the Delaware, many fans imagined that Lee would have less hard luck and more positive hard results.  His xFIP has been outstanding, but the ERA and wins have been harder to come by, confounding many casual fans.  Today, all was well with the world.  Lee did not have to draw any bows or slay suitors -- instead he merely had to beat the Cubs, who, well, aren't that hard to beat this year.

The Cubs are really cute and sort of sad, but today started with non-pitching Ryan Dempster doing an impression of Harry Caray (the Elder, Iconic, Non-Fisted Caray) when reading the lineup for the national tv broadcast.  More of this "clever" schtick was provided later in the game to the great (or at least well-feigned) amusement of the national broadcast team.  It was actually sort of sad and obnoxious.  Ryan Dempster, hopefully, has some money under his mattress for his post-baseball days.

As far as actual baseball goes, when the game finally got underway following some early huffing and puffing by a passing front, Lee was sharp, with a 1-2-3 inning to start off.  The Phils again struck early, getting things going in the bottom of the first inning.  An error and an infield single brought Chase Utley to the plate with nobody out. He crushed a double to deep Kashmir, plating Rollins and Victorino and staking Cliff Lee to all the lead he needed for the day.

In the third, the Cubs scratched Lee for a run.  Lee started out with two quick outs, and then walked a batter and was nicked for two singles of the variety which have plagued him this year.  Eventually his BABIP will come down to a normalized level, but this inning reminded the knowing observer that Ms. BABIP has it in for Lee this year.

After that, nothing happened until the seventh inning.  Well, actually, a lot happened, but nobody cares unless it's RUNZ!!!!  Garza shutting down the Phillies for the balance of his six innings with 4Ks, 3BB, 6H, and just the two runs (one earned) was a very solid performance.  Lee's was better, though.  More on that later.

In the seventh, the Phillies hitters, figuring that they might as well do something since they had to stick around for post-game interviews anyway, decided to entertain themselves by...scoring more  RUNZ!!! and helping the Phillies improve in the all-important third order win column.

At this point, Garza was out of the game to trim his chin hairs and look at his constantly protruding tongue in the clubhouse.  Sean Marshall came on in relief.  A Victorino double started things off.  Howard singled him home. Polanco flied out, bringing Ibanez to the plate, and he doubled home Howard to provide the second of what proved to be superfluous runs, but were runs which were just what the doctor ordered.

Lee continued to pitch through the eighth and finished with a flourish, getting three infield groundouts.  He finished his day with 8IP, 4H, 1R, 2BB, and 7Ks.  His cutter was working today.  The scary part may be that Lee, while effective, wasn't laser-sharp. His game score was 75, but it felt like it could have been better.  Still, this would have qualified as one of last year's top ten performances by a Phillies starter, but it seems pretty normal for this year.  Wow.

In the eighth inning, the Phillies hitters were apparently still bored. Casey Coleman walked Ruiz to start off.  Martinez pinch-hit for Lee and popped up a grenade on a sac bunt attempt that none of the Cubs wanted to go near. When it fell, Soto threw Martinez out, but it appeared that it could have been caught.  Victorino then singled home Ruiz, bringing some guy to the plate who again hit the ball clear to Kashmir, accounting for the last two of the Phillies seven runs.  This guy at second base sure sucks less than  some of the people who have played there earlier in the year for the Phillies.  I hope they keep him.

Oh, and Ryan Howard had a nifty double play in the Cubs' half of the sixth when Montanez hit a liner right to him and he stepped on the bag at first, doubling off Darwin Barney.  While Howard's throws are always...entertaining, he can make a decent play with the glove, and this was a nice one.  Not Brooks Robinson, but give the man some credit once in a while. 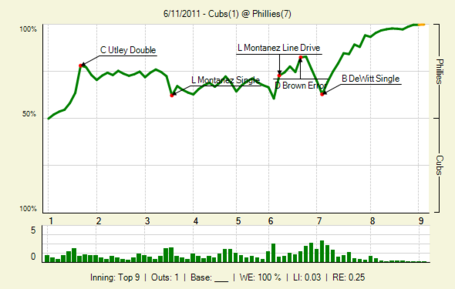