Share All sharing options for: Turning the Tables: Phillies 4, Cubs 3

This series started with the Phillies jumping out to a quick 3-0 on Thursday, only to watch the Cubs chip away and come away with a 4-3 victory at the end of the game.

The Phillies got a little bit of revenge today, flipping the script on the Cubbies and emerging with a 4-3 victory to take the four game series, three games to one, for their 40th win of the season.

The Cubs got things started in the first.  After allowing a one out single to Darwin Barney in the first, Roy Oswalt -- still showing signs or rust or fatigue or whatever -- surrendered an RBI double to Starlin Castro.  Aramis Ramirez then slugged a home run to put the Cubs up 3-0.  It would be the last run scoring play of the game for Chicago, as Oswalt settled down, only allowing one hit in his last six innings pitched.  After striking out just Kosuke Fukudome to lead off the game, Oswalt struck out four of his last five hitters faced for a total of five strikeouts in seven innings pitched.  Not outstanding, but much better than before.

The Phillies' offense looked like it was going to have "one of those days" again.  The Phillies loaded the bases with less than two outs in the first and third innings, with the Phillies coming away with just one run in each frame.  The game remained scoreless until the seventh, when Cubs superLOOGY Sean Marshall plunked Shane Victorino in the leg with a slider.  Chase Utley, the Bane of LOOGYs, then stroked a double to right field, advancing Victorino to third with no outs.  Ryan Howard -- The LOOGY Crush Object -- confounded us all by lining a single to right, scoring Victorino and Utley to give the Phillies the 4-3 lead, where the score would stay.  Howard would go 3-for-3 with a walk against the Cubs' lefty armada today, including an RBI double off starter Doug Davis in the first.

Mike Stutes pitched a ridiculous eighth inning, striking out two and making Aramis Ramirez look like a bozo in the process.  Ryan Madson brought a little drama to the ninth, allowing a two out single to Koyie Hill, bringing Geovany Soto to the plate as the go-ahead run.  Soto proceeded to CRUSH a 1-2 pitch just a few feet foul in left.  With new life, Madson induced a soft blooper to right, that Chase Utley chased down to catch for a brilliant game-ender.

The Phillies have the day off on Monday, before welcoming Florida to town for a four games in three days mid-week series. 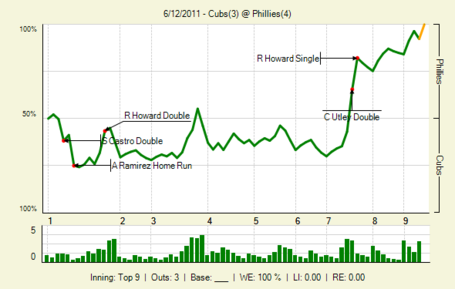