The Phillies connected for a total of five home runs, including the first two home run game for rookie outfielder Domonic Brown, as the Phillies routed the Marlins by a score of 9-1 on a cool night in Philadelphia.

The news was not all great, however, as starter Cole Hamels, who had pitched brilliantly, was lifted from the game in the eighth inning after his 99th pitch, after issuing a walk to Wes Helms. Phillies fans the world wide felt their chests tighten as Rich Dubee and the team's training staff hurried to the mound.  Later reports that Hamels was suffering from some mid-back stiffness, but was not likely to miss his next start on Sunday in Seattle.

Hamels allowed only three hits, two of which came to the game's first two batters, and one run in the first inning. He struck out six and walked just one in seven complete innings.

Although the Marlins scored in the first, it was all Phillies the rest of the way. The barrage started with a two-run opposite field shot from Ryan Howard in the first.  Joining Howard and Brown in the home run barrage were Chase Utley and Jimmy Rollins. Marlins starter Chris Volstad allowed four of the Phillies' homers, and eight earned runs over 5 2/3 innings.

Brown's second homer was a solo upper-deck shot in the bottom of the seventh off Marlins' reliever Edward Mujica.

Anyway, hope for the best for Hamels, but don't worry too much. 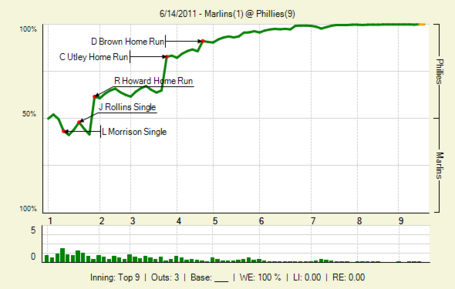