Share All sharing options for: That Escalated Quickly: Phillies 8, Marlins 1

Kyle Kendrick pitched seven strong innings and the Phillies lineup continued its recent productive run as the Phillies claimed game one of their day/night doubleheader against the Marlins by a score of 8-1.

The Phillies put the game away in the bottom of the third.  The big hits came from Wilson Valdez, whose bases loaded triple made the score 5-1, and Jimmy Rollins, whose three run homer put the score at 8-1, where it would stay for all eternity.

The aforementioned Kendrick pitched quite well (and not just lucky-well like is his usual tendency).  The right-hander struck out five and walked just one in his seven innings, needing just 88 pitches and protecting the bullpen during a brutal stretch for the pitching staff. 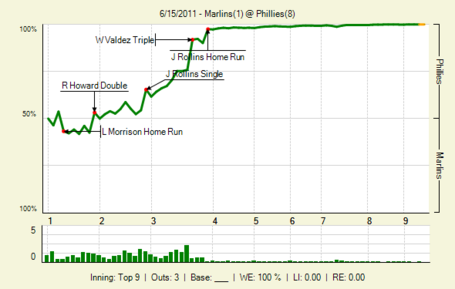