Maybe desperation was the key. After letting Marlins starter Anibal Sanchez wriggle off the hook repeatedly in the first few innings, the Phillies rallied late against the Florida bullpen, scoring twice with two outs in the ninth before winning in walk-off fashion an inning later to complete a day-night doubleheader sweep of the reeling Marlins and claim a season-high sixth straight win.

For the third straight game, the Marlins took a first-inning lead, scoring twice against Roy Halladay on a Logan Morrison groundout and a Gaby Sanchez solo homer. The Phils got one back in the bottom of the first on Chase Utley's one-out double, which plated Jimmy Rollins. Utley advanced to third on the throw, but was left there. Florida stretched its lead to 4-1 in the fourth on a two-run John Buck single. But Halladay rallied from there, holding the Marlins off through the rest of his seven innings and finishing with eight strikeouts.

The Phillies left the bases loaded in the fourth and, after Utley's one-out RBI triple in the fifth cut the lead to 4-2, failed to score him once again. Anibal Sanchez finished the fifth with his pitch count at 102, but made it through two more innings unscathed to get the lead to his bullpen. Following a scoreless eighth, Marlins closer Leo Nunez came on for the save attempt. He got Domonic Brown for the first out, but Carlos Ruiz singled just out of the reach of Mike Stanton and pinch-hitter Ross Gload followed with a soft single to center. Rollins followed with a shot that looked ticketed for center field, but slammed off Nunez's leg toward first base where Gaby Sanchez picked it up for the second out, the runners moving to second and third. Shane Victorino, previously 1 for 10 in his career against Nunez, delivered a two-run single that  sent the game into extra innings.

Ryan Madson worked around two walks in the top of the 10th, and Florida lefty Mike Dunn immediately made trouble for himself by hitting Ryan Howard with his first pitch. Two outs later, Howard remained at first, but Brown gave another indication of his progress by working a walk. That brought on Ruiz, who won it with a single out of the reach of Hanley Ramirez as Howard chugged home.

All told, a pretty good day of baseball in South Philadelphia. Check out this incline: 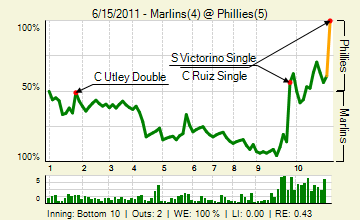