If there were a Platonic essence of Clifton Phifer Lee, it would be the mastery that he approached in Game 1 of the 2009 World Series.  In that game, with the world watching, on Yankee Stadium's mound, he was calm and dominating.  He made the hitters look like fools, and he showed athletic skills as a fielder that most pitchers not named Greg Maddux can only dream of.

Today's game is about as close as he could get to that level of mastery, to his Platonic essence, short of a post-season appearance.  Today, Cliff Lee was everything the Phillies signed him to be and more.  As a pitcher, he didn't have his strikeout stuff, the stuff that has him just below Roy Halladay as the top strikeout pitcher in baseball.  He struck out only 4 today, while walking 2.

But, he was unhittable nonetheless.  He kept the Marlins off balance, hitting his spots and making his pitches move in ways they couldn't decipher.  He induced weak-hit ball after weak-hit ball.  Never once was he in trouble, giving up only 2 hits.  It was, as he makes it look whenever he's on like this, easy.

As they say on late-night informercials, though, "But There's More!"  Lee had a stupendous game beyond his pitching.  He fielded his position excellently, including an eighth inning leaping grab of a ground-ball chopped over his head toward the third base side that he caught over-his-shoulder mid-air, landing with perfect footwork to fire the ball to first for the out.

And Even More!  He provided all the offense the team needed when, in the fourth inning, he crushed a gapper to the bottom of the right-field wall that plated Michael Martinez for the game's first run.  The Phillies got two more runs later on a Ryan Howard opposite-field home run and a Jimmy Rollins RBI double, but Lee's RBI was all that mattered.

Unbelievably, going into the start of the home stand, there was actually a segment of the fanbase, probably related to Jack McCaffery, that was down on Cliff Lee.  If those people were to identify themselves now, we could all point and laugh at them mercilessly, as Lee has given up just 1 run in his last 24 innings, striking out 21 and walking 5.  But we won't get that opportunity, because we know that they will deny they ever said anything negative about the man who looked like perfection personified today.

Simply, the Marlins were Phifer'ed today.  This is what the essence of Cliff Lee is.  That he did it to complete a 44-hour 4-game sweep of a struggling intra-division rival, to extend the team's winning streak to 7 games, and to get the team to the airport early for their cross-country flight to Seattle is just icing on the cake.

Cliff Lee, we love you man. 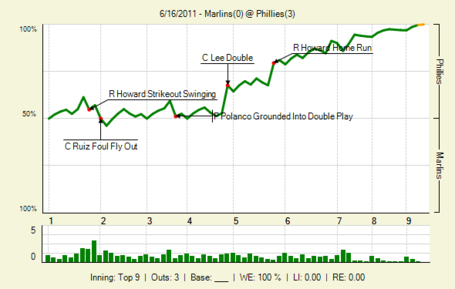