A C Student's Cultural Guide to Seattle for Phillies Fans

Share All sharing options for: A C Student's Cultural Guide to Seattle for Phillies Fans

Outlined against a bluish-greenish-themed city and under a pretty much always cloudy sky, the big-bellied, red-clad horsemen of the burgeoning legions of Phillies Nation deplane this weekend in Seattle for three weekend games of interleaguery against the Mariners, erstwhile trading buddies and fairly regular also-rans of the American League West.

Baseball aside, what are the cultural markers of this fair city, once, indeed, a Queen City, before Cincinnati, another burgh named after a Native American, so rudely took that moniker away, that make this outsized trading post so interesting? Why, there are many, of course, far too plentiful for my time and yours. And I haven't seen Sleepless in Seattle, and even if I had, I might just leave it off the list entirely to piss those of you off who need to be and cheer those of you who expect better, nerdier, and somewhat more obscure than that on this site. And if you want conventional virtual driving tours of the city, you can find them easily on the Internet. So here goes:

1. Spoken-Word Poetry. Apparently the town's a hotbed of it, and as TGP's poet-in-residence, I both dig that and feel it incumbent upon me to hep you cats. I give you Seattle resident Buddy Wakefield:

2. Music. Not just grunge, of course, but landmark rappers such as Sir Mix-A-Lot and jazzman Kenny G. But I'll bet none of you ever put together that Jimmy Rollins and Jimi Hendrix not only share their first name (homophonically at least), a love of music, and a native coast, but also a birthday, November 27. So there's one connection to baseball. Another: when my friends and I were in high school, we would wage epic "Whack Ball" battles in the backyard (Whack Ball being a derivation of Wiffle ball, played with a dead tennis ball and a Wiffle bat that had been stuffed with wet newspaper and left to dry for a few days on the roof. Prior to the game we would play this:

which we thought was very knowing and ironic before we realized that it went on for over five minutes, when we were all turn off that hippy shit and let's play.

3. Generational Rage. I don't read much fiction, but Microserfs and much of the oeuvre of Douglas Coupland speaks to me. Coupland is really a Vancouver native, but this novel is really his best and is what I'm pretty well guessing is true computer-geek culture, and is set not only in Silicon Valley but also in the Pacific Northwest.

4. A Look at the Future of Starbucks. I'd imagine that if Philadelphia spawned a worldwide coffee megalopolith, its founders would have flubbed the name, and picked not the intellectual, Ahab-contrarian Quaker, but chosen instead the melancholic Melville character Bartleby the Scrivener.

5. FISH! The Seattle-based company that spawned eons of glassy-eyed afternoon training sessions at sick corporate cultures where company leaders have abdicated their responsibility to hold themselves and their managers and line employees accountable for following the rules they've set out for themselves in the first place in the goddamned policy manual. Interestingly, you can kind of look at the Phillies' clubhouse and see that they're pretty good at following these tenets. And the book and videos aren't all that bad in and of themselves, really, if you're in a cubicle slump yourself.

6. Singles. I dun tole you I wasn't going to put in Sleepless in Seattle. This is a nice period piece at this point, a romantic comedy just on the cusp of the cell phone era. Worthwhile for the Shawn Kemp reference.

7, Robert Whiting. A nod to Ichiro Suzuki, resident OBP monster -- now, sadly, on the downslope of his career. But he is a tremendous player, and Whiting has written some great stuff about him and Japanese baseball. One book I haven't read (but mean to, I swear!) The Meaning of Ichiro, and another, You Gotta Have Wa, which I have and recommend very highly. In this Asian-influenced city, its baseball team armed with Nintendo money, it's sobering to mull the near-impenetrably awesome work ethic of Japanese baseball. My 7-year-old son's team could have really benefitted from the 1,000 ground ball drill. 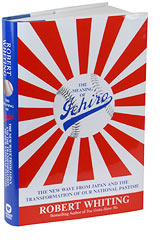