Phils, Oswalt Fall to the Mariners 4 - 2

Share All sharing options for: Phils, Oswalt Fall to the Mariners 4 - 2

In the return of Raul Ibanez to the Elysian Fields of Seattle, Michael Pineda pitched six strong innings, not allowing any hits until the sixth and final inning he pitched.  Roy Oswalt again looked pedestrian, striking out just three over six and a third innings while surrendering eight hits and two walks.  The numbers were...Kendrickian, perhaps?  The game had other interesting points, from a baseball perspective, but was a long, slow slog to a loss, the pain of which was somewhat mitigated by losses by all plausible division rivals of the Phillies (the Braves, Mets, and Marlins).

Dustin Ackley, the highly-touted rookie second baseman of the Mariners, played his first game last night.  He was the second overall pick in 2009, and, yes, he has already been picked up in your fantasy league.  He had his first major league hit off Oswalt.

Ichiro had a pesky night, with three hits and three runs scored.  Ichiro has struggled this year, but has been turning it on lately.  In the fifth inning, he put on a classic display of Ichironi, in which he reached on a single.  He went to second on a walk, and advanced to third on a sacrifice bunt.  A foul pop-up down the right field line, fielded by Utley, allowed Ichiro all the opportunity he needed to hustle home with a run.

On the other side of the ledger, the Phillies' ancient Mariner, Raul Ibanez, had a hit in his return to Seattle.  He got the start in left field over Ben Francisco for reasons known only to skipper Charlie Manuel. Game accounts suggested that Manuel gave Ibanez the start because of his "experience" at Safeco.  Insert your animated GIF jokes below.  Chase Utley had an RBI single in the sixth.  Shane Victorino had a home run late to make things interestinger, but it ultimately fell into the category of "too little, too late."

Ultimately, Pineda silenced the Phillies' bats tonight, other than the Utley RBI single, and he was the star of the game.  Tomorrow brings the exciting prospect of Vance Worley facing off against Felix Hernandez.  Yay guys?  Trap game? David v. Goliath?

Here is the suffocating Fangraph: 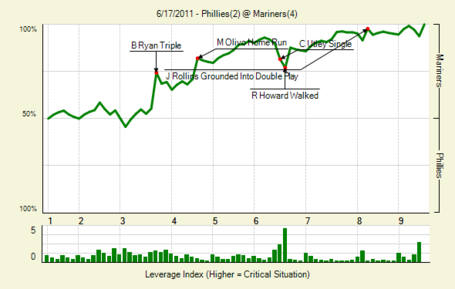