Share All sharing options for: Worley and Victorino Lead Phils to Unlikely 5 - 1 Victory Over King Felix and M's

On a night when the Phillies sent AAA call-up Vance Worley to the mound against a Mariner's team starting 2010 Cy Young winner Felix Hernandez, most Phans did not have High Hopes for a victory.  That, folks, is "why they play the game."  Savor it.  Details below the jump.

Worley, while incredibly lucky to escape the first and second innings with less damage than was done (one run) on 50+ pitches, held on for five innings of one-run ball.  Some screamers, including a double by Justin Smoak off the top of the wall in bottom of the first, did less damage than they should have.  Some hard hit balls were fortunate to result in outs.  By the time Smoak doubled, the Phillies had already jumped out to a one-run lead on a Rollins run driven in by Ryan Howard's sacrifice fly.  Instead of giving the Mariners the early lead, Smoak was held at second and Adam Kennedy, who had reached earlier, was held at third.  There they died while Worley wriggled off a very treacherous and sharp hook by inducing a ground ball from Miguel Olivo.  This was big moment in the game.

Dustin Ackley, in his second game in the bigs, drilled a home run for the M's in the second inning to tie things up.  It did not look good for Worley at that stage, as he was on track for either a 210 pitch complete game or an early exit.  Add in all the hard hit balls, and things looked even worse.  Worley managed to settle in a bit though.  He managed to get through the next three innings on about 40 pitches, but the workload in the first two prevented him from going any deeper into the game.  Things were turned over to the bullpen after five complete innings.

First up was Michael Stutes for the sixth and part of the seventh.  It took him 34 pitches to get five outs, working around two walks with one strikeout and no hits.  He was followed by Antonio Bastardo for the last out of the seventh and all of the eighth. Bastardo yielded nothing, NOTHING! to the Mariners, while striking out two.  Ryan Madson came on in the ninth to close things out.  It was a fine four innings of scoreless work, and Stutes vultured himself a win.

On the offensive side of the ball, the offense came alive for the Phillies in the seventh inning.  After Raul Ibanez whiffed, Ross Gload reached on a single.  Domonic Brown doubled, putting runners at second and third with one out.  Carlos Ruiz popped up, bringing Jimmy Rollins to the plate.  Rollins, in a role reversal with Chooch, walked, loading the bases.  Shane Victorino came to the plate.

Victorino has 2.1 of the Phillies position players' total WAR of 5.5.  Until Utley catches him in a couple of weeks, he will be the WAR leader on the team.  He earned a little more with a ground-rule double that plated two runs.  It was a near thing.  John McEnroe, had he been the Mariners' manager, surely would have come out to complain.  But as with McEnroe most of the time, there was no doubt that the ball was in fair territory, and the Phillies had a lead that the bullpen held.  Later, Victorino added insurance runs in the form of a two-run shot off Jamey Wright in the ninth.  This Victorino fellow has been a really useful player this season. 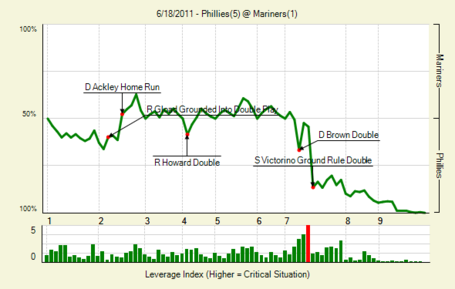