You Never Know What You'll See: Phillies Score 9 in 8th to Beat Cardinals 10 - 2

Share All sharing options for: You Never Know What You'll See: Phillies Score 9 in 8th to Beat Cardinals 10 - 2

What a peculiar night.  Roy Halladay started and was (sort of) outpitched.  Carlos Ruiz hit 4 identical balls for singles.  Michael Martinez did not accumulate negative WAR.  The Phillies beat a team with a winning record.  Raul Ibanez ran kind of fast-ish to score a run after Ross Gload got a pinch hit.

More improbable than all of that was that the Phillies scored 9 runs -- 9! -- in the eighth inning.  And they did it without a single extra base hit.  Hit the jump for an excellent summary, provided by MikeEinNC.  It was madness. 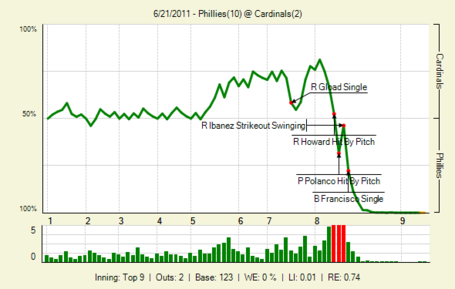