Cliff Lee continued his absolute butchering of the National League in June, pitching his second consecutive shutout and winning his fourth game of the month, as the Phillies stopped the Cardinals tonight in St. Louis by a score of 4-0.

The game got off to an inauspicious start in the bottom of the first, with Lee issuing a four pitch free pass to leadoff hitter Ryan Theriot.  One ground out and a double play later, and Lee found himself quickly out of trouble.  For the night, Lee allowed six hits and just the one walk, striking out only three.

Cardinals starter Kyle Lohse nearly matched Lee, with the exception of the fourth inning.  Lohse allowed a leadoff home run to Jimmy Rollins, followed by a single from Chase Utley and a two-run opposite field bomb from Ryan Howard that gave the Phillies a 3-0 lead.  Lohse needed just 90 pitches to complete eight innings, and amazingly struck out no Phillies batters.  One night after a game where the Phillies scored ten runs on 11 singles and no extra base hits, it was kinda different to see a couple home runs.

With Lee pitching, a 3-0 lead looked almost insurmountable.  Closing in on the shutout, Charlie Manuel left Lee in to finish what he started despite a pitch count creeping over 120.  Lee's 126 pitches on the night were a career high.

The Phillies scored their fourth and final run in the top of the ninth after a Chase Utley sacrifice fly scored Shane Victorino, who struck a one out triple.

Having closed out the series, the Phillies go for the sweep tomorrow night. 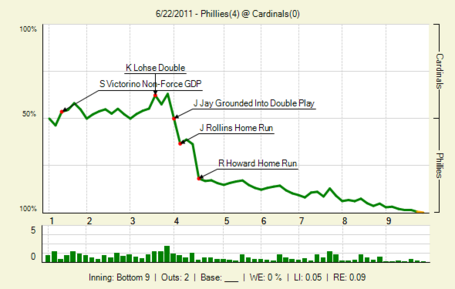