Back That Thing Up/Beat Me in St. Louis: Cardinals 12, Phillies 2

Share All sharing options for: Back That Thing Up/Beat Me in St. Louis: Cardinals 12, Phillies 2

By the third inning of this game, John Jay homered, Roy Oswalt left the game with back stiffness, Ben Francisco arguably missed an opportunity for an inside-the-park home run, Kyle Kendrick was on the mound, and the Cardinals had a 4-0 lead behind talented tough-luck pitcher Chris Carpenter.

Ugh. It was that kind of night.

Offensively the Phillies did little (highlights: RBIs from Ryan Howard in the 6th and a home run in the 9th inning by Carlos Ruiz, both with two outs after tough at bats), leaving their fans to mull some serious offensive woes with the slumparific Rollins, Polanco, Francisco and Brown, to say nothing of Ibanez (sitting for the second consecutive night). Polanco had some tough luck, as the umpire missed a 2-out single to right that John Jay unjustly sold as an out. (Damn John Jay.) Well, Chase Utley seems back to his good old self.

But that's merely so much noise surrounding the disburbing Moyerification of Oswalt, whose back issues have flared up as his velocity and strikeouts decline. Postgame, reports were that Oswalt would get an MRI on Monday and that Oswalt said his back was hurting more than in April. So the Phillies will likely place Oswalt on the disabled list and endure a spell of having Kendrick and Vance Worley at the back end of their rotation.

The Phillies finished the road swing at 3-3 and head home to play their old crosstown rivals? roommates? The Oakland Athletics, with a four-game lead in the division over the Braves. 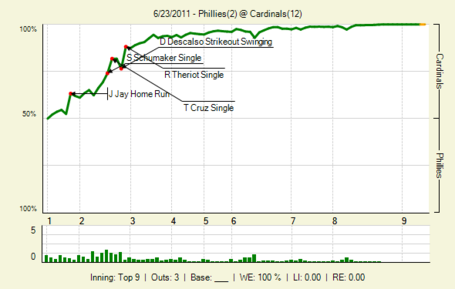 Judy Garland will make it all better, don't you worry honey.

JUDY GARLAND: 'THE TROLLEY SONG'. A CLOSEUP. (via MicheleBell1)