Ben Francisco bounced a two-out single over the played in third baseman, driving in Shane Victorino from third base for a 1-0 victory tonight in Philadelphia, as a pitching staff cobbled from various alumni of the 2011 Lehigh Valley IronPigs held the A's to two hits over nine innings.

Two struggling offenses facing their opponents' back-end starters, you'd think things would balance out. Well, it turns out mediocre pitching will flummox poor hitting.  Neither team managed a hit until a sixth inning double from the Death of Joy, Hideki Matsui, off Phillies starter Vance Worley.  Worley, while not not dominant, kept the A's off the board, only allowing that single hit to Matsui.  He walked four and struck out four.  A's starter Guillermo Moscoso was just about as mediominant (mediocre/dominant, see I made a word), allowing two Phillies hits over seven innings, walking three and striking out two.

No Oakland baserunners reached third base.

The Phillies scapped together their lone run in the ninth of A's "closer" Brian Fuentes.  After Shane Victorino coaxed a walk off the lefty, and a Raul Ibanez fly out to left, Victorino advanced to second on a Domonic Brown single.  Both runners moved up on a groundout by catcher Brian Schneider, and pinch-hitter Ben Francisco knocked Victorino home.

The game's offensive star was undoubtedly Domonic Brown, who reached base all four times he came up, walking twice and stroking two of the Phillies' four hits.

Watching a pitchers' duel is one thing.  What we watched was a pitchers' slap fight.  Not pretty.  But wins are wins. 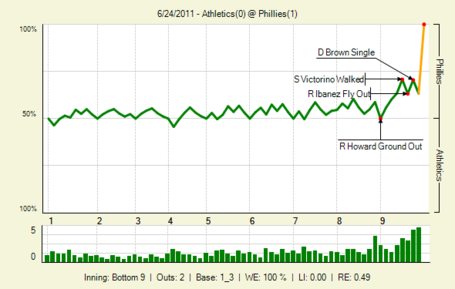