I awoke this morning to find myself in a furniture store. I have no idea how I got there.  Stinking of fortified wine and charcoal I stumbled away and tried to piece to events of the previous day back together.

At some point yesterday afternoon, there was an altercation with Cole Hamels.  We got into an argument about the best breed of backpack dog.  Words turned into fists.  Fists turned into my fist striking his chin.  And my hasty retreat like a boss!

The lineup predictably and snoozingly did virtually nothing against A's starter Trevor Cahill.  After scoring the game's first run in the second, the Phillies (obviously, check out the box score) failed to score again.  Cahill went 7 2/3 innings and just allowed three hits.  Three! Six strikeouts and three walks.

The Phillies mounted a threat in the bottom of the ninth, putting runners on first and second with one out for Brown, who proceeded to ground into a double play on a nifty glove-shovel play from Weeks.  And that's the end of our show, boom. 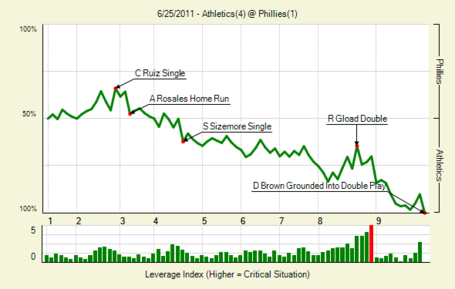