Share All sharing options for: Expect the Expected: Phillies 3, A's 1

He's probably too much of a professional to admit it, but on some level Roy Halladay must have woken up this morning thinking "I'm gonna throw a complete game today." Here was the best pitcher in the game coming off a 97-pitch light exercise in his last start (he was lifted for a pinch-hitter trailing 1-0 in the opener against the Cardinals, when Tony LaRussa's overmanaging eventually helped the Phils to a 10-2 win), facing an A's team that came into the game hitting a collective .236/.305/.342 with 41 home runs for the season.  Probably the biggest question was whether he'd finish those nine innings with any runs scored in support of his work.

The answer was Yes, though more of an anemic mm-hmm than a vigorous *&^% YEAH! The Phillies scored two runs in the first inning against one-time farmhand Josh Outman, which proved to be all they'd need behind Halladay's effort. Jimmy Rollins was the offensive hero, going 4 for 4 and scoring twice to break the 0 for 13 he'd lugged into the contest. There weren't too many other offensive heroes, though Placido Polanco showed signs of life with two hits and Ben Francisco had another dribble-single to third with the bases loaded in the fifth which plated Rollins with the team's third run. Though the Phillies had 10 hits, just one was for extra bases, and they allowed Outman to escape potential trouble again and again.

Fortunately, Halladay provided more than enough margin for offensive error despite some lamentable luck. Doc surrendered eight hits, fully four of which were of the BABIP-fairy variety; Conor Jackson, who had three A's hits, saw two of them bloop in just inside the right-field line, and Oakland scored its lone run in the fourth when Coco Crisp led off with a bunt, advanced to second on an out, and scored on Ryan Sweeney's duck snort. Oakland mounted its last and most serious threat in the seventh, when Jackson led off with a single and got to third with one out on a Scott Sizemore double. But Halladay popped up Landon Powell on one pitch, then came back from a 3-1 count to strike out pinch-hitter David DeJesus.

The win was Halladay's 10th, tying him with Jair Jurrjens and CC Sabathia for the most in MLB.  The complete game was the 63rd of his marvelous career, and MLB-NL-best fifth this season. 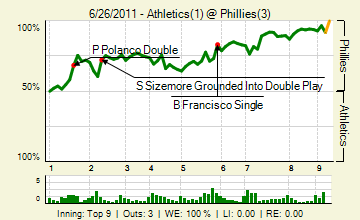