Cliff Lee became the first Phillies pitcher to throw three straight complete game shutouts since Robin Roberts in 1950, as the Phillies rolled to a 5-0 victory over the visiting Red Sox tonight.

Lee has had a very strange season -- early on he was a strikeout fiend but was getting batted around. He's returned to a more contact-oriented approach (whether by design or accident) and has gotten much better results. Shrug.

The vaunted Red Sox offense barely mustered a colorable threat, apart from a Darnell McDonald leadoff double in the eighth inning. Lee retired the next three Red Sox batters, leaving McDonald stranded at second.  The Sox managed only two hits and drew two walks, with Lee striking out five batters.  He faced just two over the minimum thanks to a pair of double plays.

The Red Sox' awesome starting pitcher, Josh Beckett, didn't have such an awesome night. The Phillies jumped out to a 2-0 lead in the second inning on a two run shot to center from Domonic Brown. The Phillies would add another run in the fifth on a sacrifice fly from Cliff Lee, driving in Domonic Brown, who led off the frame with a double and advanced to third on a sacrifice fly from Carlos Ruiz.  Shane Victorino delivered the kill shot in the form of a two run home run in the sixth inning.  All five runs were charged to Beckett. 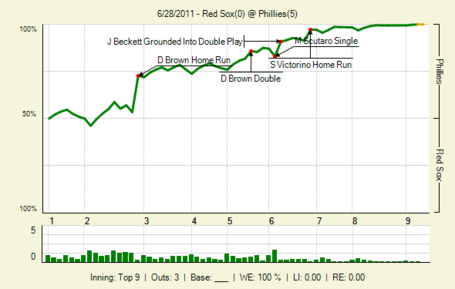