Share All sharing options for: Beware of the Vanimal: Phillies 2, Red Sox 1

Vance Worley pitched seven innings of one run ball tonight as the Phillies again shut down the Red Sox 2-1.  No one in the Red Sox lineup had faced the Vanimal (as everyone insists on calling him) before, which definitely worked to his advantage.  He gave up just five hits and two walks to the slightly altered Red Sox lineup.  Stutes and Bastardo closed it out with a scoreless eighth and ninth, despite Stutes having cut his hair several days ago.  I know many (including myself) are relieved that his power does not come from his hair like Samson, but from within.

After last night's complete and utter domination of his team, Terry Francona decided to take today's game a bit more seriously, moving Adrian Gonzalez to right field and David Ortiz to first base.  Second baseman Dustin Pedroia joked before the game that now he had to play first, second, and right.  Considering that the pre-game chatter on NESN pointed out that Big Papi's glove looked brand new and that Gonzalez barely knows where right field is located, he was probably right to worry.  But the only big play for the rearranged fielders was Chase's eighth inning triple off the very top of the wall, which Gonzalez uselessly jumped at.  Of course, the point of moving them around was to get the best Sox bats in the lineup.  That didn't quite work out the way Francona imagined it, with the only run of the game coming from a Lackey double in the fifth.  Yes, you read that right.

Lackey, who entered this game 5-6 with a 7.36 ERA, allowed eight hits and two runs on the night, failing to implode like his history suggested he might.  Raul Ibanez has once again woken up from his suck-slumber, going 3-for-3 off Lackey, with a single, a double, and a home run.  He brought in both of the Phillies runs tonight.  I look forward to his torrid pace over the next eight to ten games, followed by another thirty games of painful flailing.

With this victory, the Phillies win their first series against the Red Sox since 2003.  These games are going a long way towards erasing the revolting memories I have of last year's Red Sox series.  The series ends tomorrow at 1:05 with Cole Hamels facing Jon Lester.  It's gonna be a barn burner. 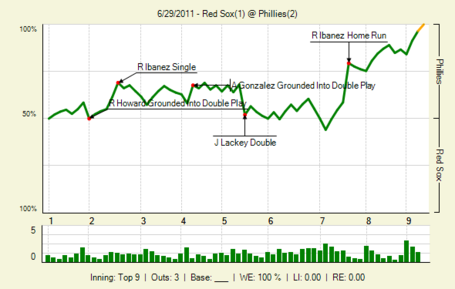