Never mind that he went 0 for 4 with two strikeouts: Boston slugger Adrian Gonzalez, already a strong MVP candidate through the first half of the season, probably did as much as anybody to help his team escape South Philadelphia without getting swept.

Through three innings, the anticipated Leftocalypse between killer cyborg southpaws Jon Lester of the Red Sox and Cole Hamels of the Phillies was unfolding as expected: both pitchers had faced one batter over the minimum, and only one base runner had set foot on second base.  But with one out in the fourth, Gonzalez hit a screamer back through the box that knocked the glove off Hamels' right hand. Cole recovered to record the out, and finished up the inning by getting Dustin Pedroia to ground out, but his day was over. The good news: X-rays came back negative, and Hamels is expected to make his next scheduled start Tuesday in Miami against the Marlins.

The bad news? The promoted-en-masse Phillies bullpen gave a few reminders why they all started the year in triple-A. David Herndon relieved Hamels in the fifth and quickly surrendered two runs, as Josh Reddick tripled and three of the next four Boston hitters singled to put the Red Sox ahead. An inning later, aged catcher Jason Varitek hit the first of his two solo homers on the afternoon off Herndon; in the eighth, Dustin Pedroia and Varitek would go back to back off Drew Carpenter, who an inning earlier had escaped a first-and-third, no out jam.

Meanwhile, the Phillies couldn't do much of anything with Lester, who was as good as advertised. They didn't get a hit until Chase Utley's one-out single in the fourth, and only seriously threatened in the seventh as Lester's pitch count climbed toward 120 as Ryan Howard singled and Shane Victorino walked with one out. But Lester got Ben Francisco to fly out to center, then struck out Raul Ibanez on a full count with his 120th and final pitch, an 89-mile-an-hour fastball. The Phillies avoided getting shut out for the sixth time this season when Howard hit a majestic two-run shot into the second deck against Bobby Jenks in the ninth inning. 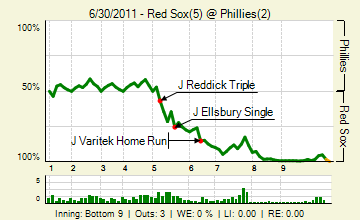