Rum, Sodomy and the Lash: Pirates' Wood Has His Way With Kendrick, Phillies

Share All sharing options for: Rum, Sodomy and the Lash: Pirates' Wood Has His Way With Kendrick, Phillies

The Phillies lost tonight to fall to 12 - 32 in their very own Ninth Circle of Hell, PNC Park.  The largest crowd ever to see a game at PNC came to watch the three rivers turn to blood and the Phillies lose to the Pirates in Pittsburgh AGAIN.  The loss was the fourth consecutive for the Phillies, matching the longest losing streak of the season, as the annual June Swoon is clearly underway.

Whether Kyle Kendrick is actually in league with Satan may be a moot point, as Kendrick had little to do with most of what went wrong for the Phillies tonight. That's not to say that I am underestimating or ignoring his selfless contribution to the cause, but he was far from being the sole participant in the ritual sacrifice of the Phillies.  In fact, the Bullpen of the Damned pitched this game -- Kendrick, Zagurski, Romero, and Baez.  Each surrendered at least a run, except for Zagurski.  It was not pretty.

The game started with portents and omens.  The large crowd in Pittsburgh was a bit unusual, but the post-game fireworks and the travelling Phillies fans helped the Pirates to a rare sellout.  The second omen that things were not going well for the Phillies tonight was the foul ball Rollins hit off his leg in the first at bat of the game.  Rollins then doubled down the right field line, but he was obviously not right and came out of the game later on.  Rollins did come home after a single by Polanco moved him to third.  Howard drove him home with a sac fly.

The Pirates answered in the bottom of the first inning with two runs off Kendrick.  Two doubles, a single, and a sacrifice brought home two runs.  Kendrick did not look good, and he never really settled in.  He walked no batters, struck out nobody, and was sort of ineffective for five innings, giving up four runs.  His ERA of 3.78 has clearly been manipulated by the Deceiver.

The Phillies scratched out a run in the 4th inning to tie when Victorino reached on a leadoff single.  He went to third on a single by Ibanez, and came home on a ground out by Domonic Brown.  After being retired, the Phillies sent Wilson Valdez out to replace Rollins, whose knee was troubling him from the foul in the first inning.

The Pirates immediately answered with another two runs with some hard-hit balls.  Lyle Overbay led off with a triple and came home on a groundout.  Brandon Wood, who couldn't hit a crackpipe last year, Rochambeaued a solo shot to left.  His average soared to under .200.

Kendrick left after the fifth inning, and the Phillies stopped scoring until the ninth inning.  In the meantime, the Phillies and their pitchers provided the comic relief.  Zagurski pitched a scoreless sixth inning, surrendering only single.  In came Romero in the seventh.  He promptly walked Matt Diaz.  No, really, he did.  Diaz stole second and was driven home by a double.

Not content that the game was already lost, the Phillies sent out Danys Baez to nail it down.  Baez walked Chris Snyder to lead off the inning.  Brandon Wood hit into a fielder's choice, but a throwing error by defensive specialist and team MVP Wilson Valdez (recall that Rollins was hurt and out of the game) allowed Wood to go to second.  Wood advanced to third on a ground out. Wood finally came home on a wild pitch.  The final run by the Pirates scored with nary a hit.

The Phillies, in the meantime, could not plate any runners.  Even though they were ultimately 4-13 with RISP, three of those hits were infield singles that plated nobody.  Not until a ninth inning hit by Polanco could the Phillies plate a runner with a hit with RISP.  It was that kind of night.  Not snakebit - damned (but life goes on).  And Kyle goes home to his girly-girl to roll in his swimming pool full of money after another performance full of fringy AAAA goodness.  Sigh.

Here's a Fangraph.  Hint: it sucks. 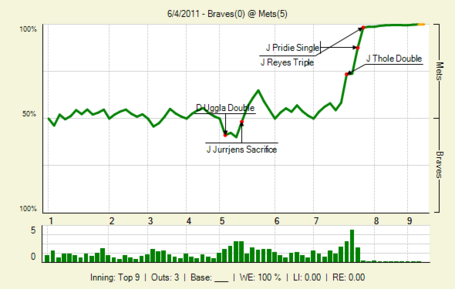 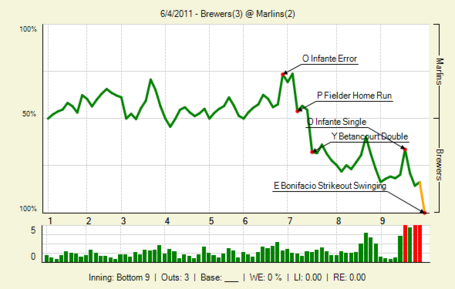 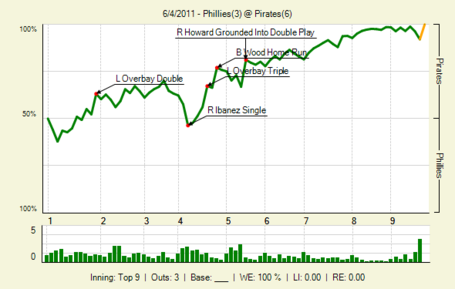 Tomorrow, instead of Faux Halladay going for the Pirates, the Phillies have Foe Halladay ready to slay some Buccos.  Maybe there will be a happy ending to at least one Pirate saga this weekend.