It takes work for a game started by Roy Halladay that doesn't reach extra innings to stretch nearly to four hours, but the Phillies and Pirates managed on a long, frustrating Sunday afternoon that nonetheless ended with a 7-3 Phils win that brought them home from a disappointing but not disastrous 4-5 road trip.

Coming off back to back starts in which he allowed at least ten hits to the Reds and Nationals, Halladay quickly fell behind 2-0 when Pittsburgh's Neil Walker clubbed a high fastball on a 1-2 count out of PNC Park. Halladay thought he'd had Walker struck out two pitches earlier, but home plate ump Angel Hernandez called the pitch just off the outside edge--just as one would expect in a June game in Pittsburgh. Halladay allowed leadoff singles in each of the next two innings, but after opposing pitcher James McDonald reached to lead off the third, Doc bore down and retired the next 11 Pirates hitters. He would finish the day having allowed just those two runs in seven innings,  on six hits and a walk against six strikeouts, to improve his 2011 record to 8-3.

Meanwhile, McDonald cruised through the first three innings and then completely lost the strike zone. He walked Chase Utley and Ryan Howard to start the fourth, sprinkling in a wild pitch and a passed ball for good measure. Raul Ibanez put the Phillies on the board with a deep sacrifice fly to score Utley, earning his 1000th career RBI. McDonald hit Carlos Ruiz with a pitch to put men on the corners, and Domonic Brown seemed to have tied the game with a single up the middle--but the ball struck umpire Chad Fairchild, and Howard was ordered back to third. That brought up Wilson Valdez, who fouled off the first pitch from McDonald--because why wouldn't you go up hacking against a guy who'd issued two walks and a wild pitch and hit a batter through the first five hitters of the inning?--narrowly avoided getting hit by the second pitch, and softly grounded the third into a double play that ended the inning. Again: Pittsburgh in June.

McDonald didn't do much with his reprieve, exiting the ballgame after walking Halladay, Shane Victorino and Placido Polanco to begin the fifth inning. Facing reliever Chris Resop, Utley grounded into a fielder's choice that forced Halladay at home. Howard followed with a dozen-pitch battle that finally concluded in a 400-foot flyout to the deepest part of PNC Park; it wasn't a grand slam, but it did tie the game. After an intentional walk to Ibanez, Ruiz was hit by a pitch for the second time in as many innings; this one forced in the go-ahead run. Brown just missed a grand slam with a deep foul to right, then grounded out to end the inning. In all, the Phillies left 16 runners on base for the game.

The Phils added a run in the sixth on a Polanco single that scored Halladay, and got another on a Howard RBI single in the 8th. Jose Contreras came on in relief of Halladay and saw his ERA, previously 0.00, rise to 0.77 as he surrendered back-to-back doubles with one out that drew the Pirates within 5-3. But Antonio Bastardo restored order, striking out Garrett Jones with the tying runs on base to keep the score right there. The Phils cashed two more insurance runs in the ninth, and Ryan Madson struck out two to close things out. 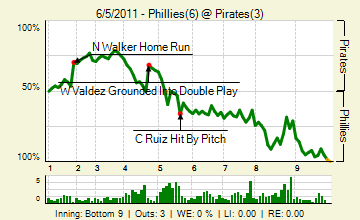