Monday's contest went just about the way the Phillies imagined most of their wins going in 2011 -- strong starting pitching, just enough runs to win.

Cliff Lee shut the Dodgers out on seven hits (all singles), one walk, and ten strikeouts in seven innings, his sixth double-digit strikeout game of the season. Lee was unlucky on balls in play, yet again -- allowing seven hits on 18 fair balls -- but kept runners of the bases and held the Dodgers to zero extra base hits. The Phillies scored all they'd need in the third inning, with RBI singles from Placido Polanco and Ryan Howard.  The Phillies would add a third insurance run in the bottom of the eighth on an RBI double from Carlos Ruiz, that missed leaving the yard by just a few feet.

Ted Lilly did a nice job, limiting the Phillies to just two runs and five hits in six innings.

Antonio Bastardo pitched a perfect eighth inning for the Phillies, and Ryan Madson, despite allowing a run on two hits, collected his 13th save, recording two strikeouts and making Rod Barajas and Dioner Navarro looking absolutely silly on those two Ks to end the game.

Let's be honest: That was a boring game. But boring wins are okay too. 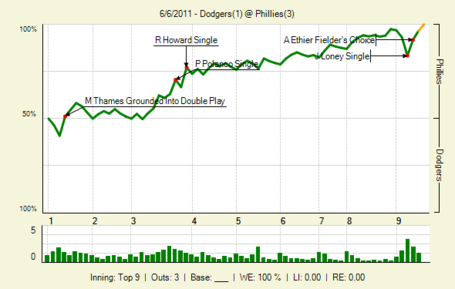