Rubby one out: Dodgers 6, Phillies 2

Share All sharing options for: Rubby one out: Dodgers 6, Phillies 2

A guy named Rubby walked five Phillies in his first two innings of work. After the Phillies emerged from the second inning with just one run to their credit, it was all but an Exxon-Valdez-with-a-runner-on-first-and-less-than-two-outs inevitability that they would lose tonight's game.

Lo and behold, at the end of nine innings, the Phillies had just five hits, six walks, and two runs. The Dodgers, on the other hand, touched up Oswalt for four runs in six innings of work and finished the night with six runs total, adding a pair more when Matt Kemp took Mike Stutes deep in the eigth inning.

The sudden erosion of Oswalt's ability to induce swinging strikes or to record outs by way of the K has now gone from "mildly concerning" to "more than mildly concerning." After racking up all of one strikeout tonight, his K/9 sits at just 5.3 on the season. Not Kyle Kendrick bad (yet), but not good.

Also also, another Phillie was gunned down at the plate tonight. This time it was Raul Ibanez -- who can neither catch, throw, nor run -- in the bottom of the third. I don't have the time or energy to verify this with statistics, but I think Juan Samuel sucks at his job.

Kuroda, who has allowed just seven hits and two runs in 26.2 career regular season innings against the Phillies, will face off against Cole Hamels tomorrow. I'm SO looking forward to that. 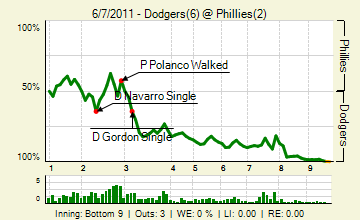