The Book of Cole: Phillies 2, Dodgers 0

Share All sharing options for: The Book of Cole: Phillies 2, Dodgers 0

The ongoing maturation of Cole Hamels has been incredibly satisfying to watch.  Ostensibly the Phillies' fourth starter entering the 2011 season, Hamels has been nearly as good, if not as good, as the King of the Hill, Roy Halladay.

Hamels went eight strong innings allowing just six hits, striking out nine and walking none, en route to his eighth victory on the season.  His ERA on the season is down to 2.58.  Hamels' curveball was particularly sharp, and seems to be becoming a true weapon for the left-hander.

The only real trouble came for Hamels in the seventh and eighth innings.  After facing a first and third with no outs jam in the seventh, Hamels induced two pop-ups and a strikeout to end the threat with no damage.  In the eighth, the Dodgers managed first and third with two outs, but Hamels got Andre Ethier to ground out to complete the inning.  Hamels threw 113 pitches -- 77 for strikes.

For the first part of the game, it looked like 2010 again -- brilliant pitching from Hamels, but no offensive support.  With long-time Phillies nemesis Hiroki Kuroda on the mound, the seemed entirely fitting.  Things picked up in the bottom of the sixth when Ryan Howard connected for a solo homer -- the entire team's first bomb in the month of June.  The Phillies scored their second run in the bottom of the seventh on a fielder's choice by Domonic Brown, scoring Shane Victorino on a sweet slide around Rod Barajas.  Of course he did.

Ryan Madson allowed one hit in a scoreless ninth for the Save.

Hey, they won the series! 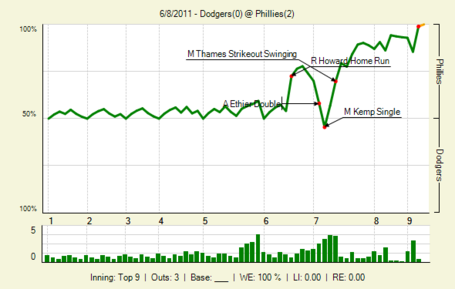