Share All sharing options for: Spirit of '07: Phillies 7, Blue Jays 6

On Canada Day 2011, the Phillies took the opener of their last interleague series by drawing from their 2007 playbook: dubious pitching, resilient offense, back and forth scoring, outcome in doubt till the end. It even featured Kyle Kendrick, at both his lucky/good best and command-deficient, tatertacular worst, and concluded with heroics from Chase Utley and Ryan Howard.

Things didn't look good early, as Kendrick--back in the rotation for the indefinite future with both Roy Oswalt and Joe Blanton on the disabled list and Cole Hamels' near-term availability in doubt--gave up two first-inning runs on a hit batter, a Jose Bautista ground-rule double and a two-out double by Edwin Encarnacion. Against Ricky Romero, the Toronto lefty ace who brought into the game stellar numbers in two career starts against the Phillies and a nine-start streak of at least seven innings each, the deficit felt larger. But the Phils tied it on single runs in the second and third, with Shane Victorino scoring the first run on a Ben Francisco double and driving in Utley for the second.

The score stayed 2-2 until the fifth, when Kendrick gave up a single to Aaron Hill followed by a long two-run homer to rookie Eric Thames.   But the Phillies rallied again, pulling to within 4-3 in the sixth when Domonic Brown, getting a rare start against a lefty, led off with a double, stole third and came home on a Carlos Ruiz single. They knocked Romero out an inning later on Howard's one-out single, and tied it against reliever Jason Frasor on a Victorino triple. He came in on a Francisco sac fly to give the Phils their first lead of the day at 5-4.

At this juncture, the effect of the Phils' run of bullpen injuries made itself felt. Kendrick entered the seventh at 83 pitches and had struck out two Blue Jays in the sixth, but it's hard to imagine he would have stayed in were any of Jose Contreras, Ryan Madson or Brad Lidge available. Stay in he did, though, sandwiching outs around a Hill single. That brought up Bautista, who slammed a first-pitch belt-high meatball into the left-field seats for his 25th homer of the season and a 6-5 Toronto lead.

The Phillies had one comeback left, against closer Frank Francisco in the ninth. Placido Polanco, not known for his patience, worked a full-count walk to lead things off, and Utley followed with a seemingly innocuous fly ball to left that carried and carried, falling on the track beyond the reach of Juan Rivera to put men at second and third with no outs. Howard fell behind 1-2, then lashed a single to center that scored both runs. Antonio Bastardo came on to close things out with a 1-2-3 ninth, striking out Hill to notch his fourth save.

Danys Baez earned the win with a scoreless eighth inning, as the Phillies tasted victory for just the third time this season when the opposition scored at least five runs. Check out the waves! 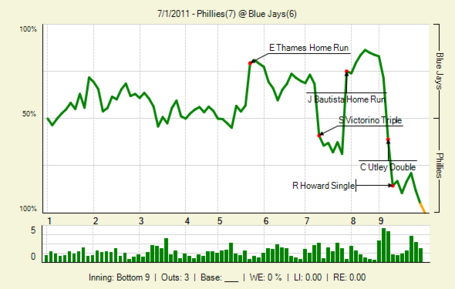