Through the first two games of this series, it would have been hard for even the staunchest partisan of either the Braves or Phillies to argue there was much difference or distance between the NL’s top two teams. Through two stomach-churning high-drama extra-inning games, we’d seen four great starting pitching performances with no decisions attached to any of them; up-and-down bullpen work on both sides; occasional bursts of power; and one win each. As of early Sunday afternoon, all that effort had left the teams right where they started: with the Phillies holding a 2 ½ game lead in the NL East.

A few hours later, after the Phils got yet another brilliant performance from Cole Hamels and their injury-reduced lineup cranked out a season-high 20 hits, the lead was back to 3 ½, and at least for a day, the gap between the teams seemed considerably larger as the Phillies sent the Atlanta staggering into the all-star break on the receiving end of a 14-1 loss.  Clickety ho!

The Braves got their run first, on a second-inning Julio Lugo grounder to short that scored Dan Uggla. Ryan Howard dropped the throw from Jimmy Rollins, adding an error to his day after grounding into a double play on a 3-0 pitch to end a first-and-third, one-out threat in the first. That was pretty much the last bad thing that happened to the Phils all day, as they tied it against Derek Lowe in the bottom of the frame on the first of John Mayberry’s three doubles on the afternoon. They added two more in the third, as Howard redeemed himself with an RBI single and Raul Ibanez knocked in another as Uggla couldn’t handle a possible double-play ball. Rollins added an RBI single an inning later to make it 4-1.

There it stayed through the next three innings, as Hamels got stronger and stronger. After retiring Lowe with two men on to end the fourth, Hamels mowed down the last twelve Braves he faced. By then, the outcome wasn’t in doubt: with top-shelf Atlanta relievers Jonny Venters and Eric O’Flaherty getting the day off, the Phils feasted on lesser lights Cory Gearrin and Scott Proctor, who combined to allow ten runs in the seventh and eighth innings. Ibanez, Domonic Brown and Mayberry each delivered two-run hits, and Ibanez followed with a three-run bomb in the ninth off Proctor to end his day with six RBI.

It was a big day for Michael Martinez, who delivered a career-high four hits to raise his average from .192 to .229. Mayberry and Brown set career highs as well with three hits each. All in all, it’s hard to imagine a higher note on which the club could have ended the first half. 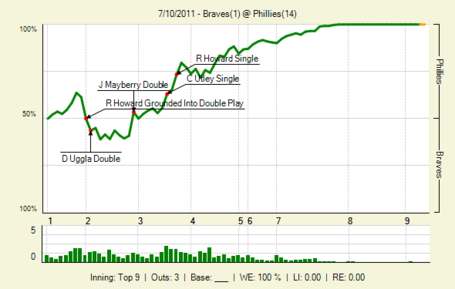