This is an update to this post from the end of last season: The Phillies' Home: Fairest in the Land.

In summary, that article reviewed Park Factors (explained below) for all MLB stadiums for the 3-year period 2008-2010.  It found that contrary to its reputation, and in spite of relatively short dimensions, Citizens Bank Park was one of the most neutral parks in baseball, both for overall scoring, and home runs in particular:

... the bottom line is there are essentially no more runs scored, and no more home runs hit, in the Phillies' home games than there are in their away games.

Park Factors are calculated by comparing stats in a team's home games with stats in that team's away games, against the same opponents, in order to control for team-by-team differences.  A number higher than 1.0 indicates a hitter's park, while lower than 1.0 is a pitcher's park -- a park factor of 1.1 indicates the stadium increases offense by 10%.

In the first half of 2011, the results have been very similar to the past 3 years.   CBP is squarely in the middle, suppressing scoring slightly while being almost exactly neutral in terms of boosting or suppressing home runs:

(more after the jump) 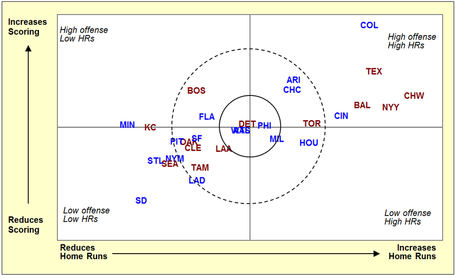 The teams clustered under DET in the middle are ATL and WAS.