The kids are alright once again. Vance Worley pitched 5 1/3, allowing a single run on three hits, with four strikeouts and four walks, and John Mayberry drove in five of the Phillies runs, as the Phillies topped the Mets and R.A. Dickey by a score of 7-2.

The Phillies plated their first two runs on an RBI single from Mayberry in the second inning, driving in Raul Ibanez and Carlos Ruiz. Domonic Brown would come in to score on a Vance Worley RBI groundout, as the Phillies would get all of the runs they'd need in that inning.

Raul Ibanez continued his (obligatory) hot streak with a solo home run in the sixth, and also made a terrific diving catch on a Ruben Tejada liner in the gap in the fifth inning.  Mets starter R.A. Dickey would go seven full innings, allowing four Phillies runs on six hits. The Mets threatened in the bottom of the sixth, with Worley loading the bases with one out after allowing a walk to Carlos Beltran, a single to Daniel Murphy, and a walk to Jason Bay. Lefty reliever Juan Perez would get the second out by striking out Scott Hairston, but the Mets' first run would score on a wild pitch strike three.  Perez then got out of the inning by inducing a Ronny Paulino groundout to third.

Ryan Madson, in his first game since being activated from the disabled list, looked sharp, throwing a perfect seventh inning, striking out two.

The Mets would score their second run on a solo bomb from Carlos Beltran off Mike Stutes, Prince of Regression, in the bottom of the eighth.

The Phillies would break the game open in the top of the ninth on a bases loaded, bases clearing double from John Mayberry, who is clearly making the most of his playing time since taking over in center field for the injured Shane Victorino. Two key defensive miscues, one from Justin Turner on a dead double play ball, and another from Ruben Tejada on a standard ground ball, kept the inning alive just long enough to allow Mayberry to delivery the kill shot.

Antonio Bastardo would pitch yet another hitless inning in the ninth to close things out. 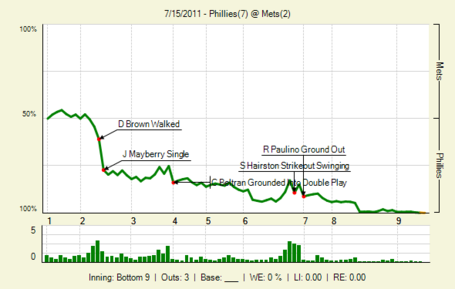