Share All sharing options for: This Game Isn't Played On Paper: Phillies 2, Mets 11

The Mets took batting practice off Cole Hamels and Danys Baez today as they absolutely thumped the Phillies in the second game of this series. Hamels was less than sharp, and the Phillies were stymied by Jon Niese, obviously still in the afterglow of having proposed to his girlfriend over the break.

It seemed clear in the first inning how this game was going to go. It all started when a popup dropped right between Utley and Howard, allowing two runs to score. Howard had called for it, so his defensive excellence continues. (It was a sloppy day defensively for the Phillies in general, including Ben Francisco and Raul Ibanez.) It all went downhill from there. In the third inning, Hamels walked the pitcher, allowed a single to Justin Turner, and then Scott Hairston hit a bases clearing double. He allowed another run in the fourth and three in the fifth before being yanked. Cole walked four on the day, and allowed seven earned runs on eight hits in just 4 1/3. One of the hits was a monster second deck home run hit by Daniel Murphy.

Herndon came in to pitch the rest of the fifth and sixth innings, and allowed three hits, and one of Hamels' baserunners to score. The Phillies even scored two runs in the top of the seventh (they loaded the bases and scored on an error, and then on a double play ball hit by Jimmy Rollins). At that point, I foolishly thought that if the Phillies could keep the score stable, they could scrape back. Then, Baez came in to pitch the seventh. He got two quick outs but couldn't end it, allowing a double to Lucas Duda, a walk to Pagan, a single to Turner (which scored Duda), and then a three run homer to Scott Hairston, all in consecutive at bats. In one inning of work, Baez allowed four hits and four runs to score. I'm hoping that instead of DFAing him when Victorino or Lidge comes back, they launch him into space.

The commentating just made the game worse, saying "This game isn't played on paper!" at least four times in response to the Mets' offensive outburst. They spent a lot of time focusing on the home plate umpire, who took a foul ball off the back of one of his hands. I really didn't need that many shots of his purple, distended knuckle. They also regaled the viewers with a story about how Jon Niese and one of the other Mets players (forgive me for not caring enough to remember who) proposed to their girlfriends over the break. Niese proposed while playing with dolphins in the bahamas, and the other guy apparently lied to his girlfriend about the bathroom being flooded, and she walked into a house crammed with roses to the bursting point.  (Is creativity in a proposal too much to ask for?) They actually said "The Mets lead the league in love!" Someone actually said that. Out loud. Into a microphone.

I should note that Rollins was replaced in the bottom of the seventh inning, and the Fox broadcast showed him massaging his foot in the dugout. According to the beat writers, he has some tightness in his right leg, which is just super news. Jimmy is apparently not concerned at all, which shockingly doesn't make me feel better.

The Phillies finish the series with Kyle Kendrick (4-4, 3.58 ERA, better in the bullpen) facing off against Mike Pelfry (5-8, 4.55 ERA, wildly inconsistent). 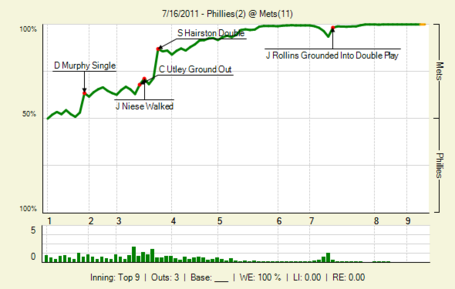